States With Least Strict Gun Laws Have Most Gun Deaths 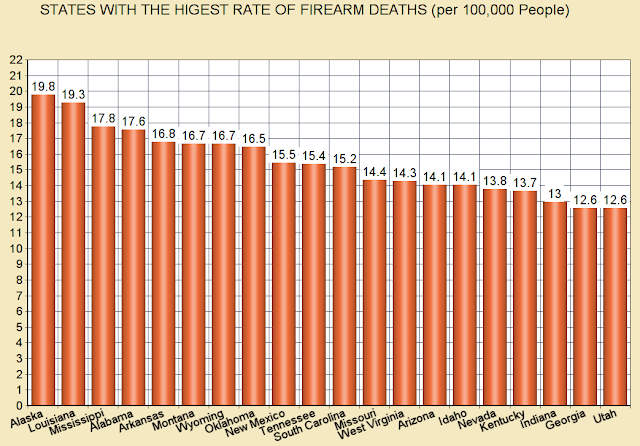 The NRA and other gun-nuts like to claim that strict gun laws have nothing to do with less deaths by guns. They love to point to Illinois (where Chicago has strict gun laws but too many gun deaths). I don't know whether they are outright lying, or are just ignorant of the facts, but their premise is simply not true.

The chart above was made from numbers from the National Center for Health Statistics, as reported by CBS News. It shows the 20 states with the highest rate of gun deaths per 100,000 people (from all causes -- homicide, accidents, and suicides).

Note that these are all states with very loose gun laws (including background checks), and most are also ruled by Republicans. If the states with the least restrictive gun laws have the most gun deaths, then it becomes obvious that having stricter gun laws does reduce the number of gun deaths. The only conclusion other than that which could be is that somehow the people in these states are more prone to violence than people in the other 30 states -- and I don't believe that for even a second.

Don't believe the NRA! Gun laws do work to reduce the amount of gun deaths.

Don't misunderstand me. I do not want to take away the guns of law-abiding citizens, or prevent them from buying guns. While some of my liberal brothers and sisters disagree with me, I believe the Constitution does guarantee law-abiding citizens that right. But it is not an unlimited right, and the Supreme Court has ruled that certain dangerous people can be prevented from owning a gun.

One effective thing we can do to reduce gun deaths of all kinds is to plug the loopholes in our background check law for those wanting to buy a gun. This is supported by around 90% of the population (including gun owners) -- and it would prevent terrorists, criminals, and other dangerous people from legally buying a gun. Currently 40% of the guns bought in the U.S. each year are bought without any kind of background check. That is ridiculous, and it's something we must fix (regardless of what the NRA and gun manufacturers want).
Posted by Ted McLaughlin at 12:02 AM