Texas Is Number One (In The Number Of Uninsured Children) 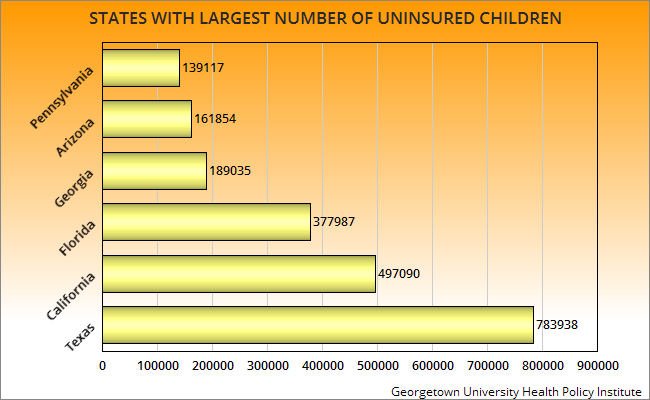 Texas is number one in another statistic, but it is not one that any Texan should be proud of at all. Texas leads the nation in the number of children that have no health insurance coverage -- about 783,938 children. That's far more than any other state, and makes up about 17.8% of all uninsured children in the entire United States. Let me put that another way -- Texas has nearly one out of every five uninsured children in this country!

Those are shameful statistics, and in no way can they be justified. How can this be? It is because Texas is ruled by ultra-right-wing Republicans who care only for the rich (and are perfectly willing to throw poor children under the bus so the rich and the corporations won't have to pay taxes). Texas has no income tax, and the taxes they do have are very regressive (meaning the poor, working, and middle classes must pay a much larger percentage of their income in taxes than the rich and corporations pay).

The Republicans call this the Texas "miracle". I call it the Texas "shame" -- and I have never been more embarrassed to be a life-long Texan than I am right now, because it doesn't have to be this way.

These numbers on uninsured children are from the new report by the Georgetown University Health Policy Institute's Center for Children and Families. You can go to their website to see how your state measures up.