A Gift Suggestion For Your Right-Wing Family And Friends 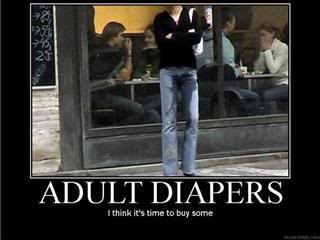 (This image is from the Photobucket page of leeannellebracht.)

With the holidays approaching, I offer you this suggestion for a gift for your right-wing Republican family members and friends -- for those times when they pee their pants out of fear from the fear mongering of their leaders.

Some of you may think that's over-the-top, but frankly, I getting sick of the cowardice being displayed by the right-wingers. Now they are terrified of muslim refugees (mostly women and children who have gone through a stringent 2-year vetting by our State Department, Homeland Security Department, and FBI). We are a nation composed of the descendants of immigrants (both documented and undocumented) and refugees -- and yet these pants-wetting cowards are willing to deny our history and toss out our values.

Whatever happened to courage in the face of the dangers we face? It has never been easy to live up to our values, but our ancestors did it. Why can't we? We have accepted refugees from many countries, and had very few (if any) problems from that -- because those refugees were thoroughly vetted before being allowed to come here. Why should we think it would be any different for the refugees trying to escape the violence in Syria (which was largely caused by our interference in that region)?

And if you can afford it, you might consider a year's supply of those diapers for your right-wing family and friends. This is not the first thing they have been terrified by, and it certainly won't be the last. They are terrified of immigrants, of people with darker skin (even those born in this country), of allowing everyone to vote, of equal rights (for women, minorities, homosexuals, etc.), of gun restrictions (even those that don't violate our constitution), of health care for all citizens, and of economic fairness (unions, minimum wage raise, free education, progressive taxation, etc.) -- just to name a few of the right-wing fears.