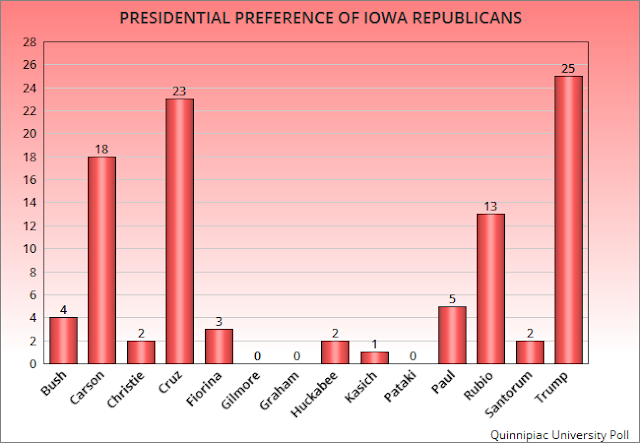 The Quinnipiac University Poll has done a new survey of Iowa Republicans on their presidential preference. They surveyed 600 Iowa Republicans between November 16th and 22nd, and the poll has a margin of error of 4 points.

The poll shows that Ted Cruz has surpassed Ben Carson in Iowa by 5 points. Cruz is second only to Donald Trump by 2 points -- but with the poll margin of error being 4 points, the best we can say are that Trump and Cruz are virtually tied. Rubio finished in fourth with 13%, and all of the ten other candidates finished with 5% or less.

What can we glean from this poll? First, that Iowa is still very volatile. I don't think I've seen two Iowa polls in a row with the same results. Second, this seems to be boiling down to a four-man race (Trump, Cruz, Carson, and Rubio). Third, unless something changes, no GOP candidate is going to emerge from the Iowa caucuses as the clear leader.
Posted by Ted McLaughlin at 12:04 AM