The Media Is NOT Picking On Ben Carson 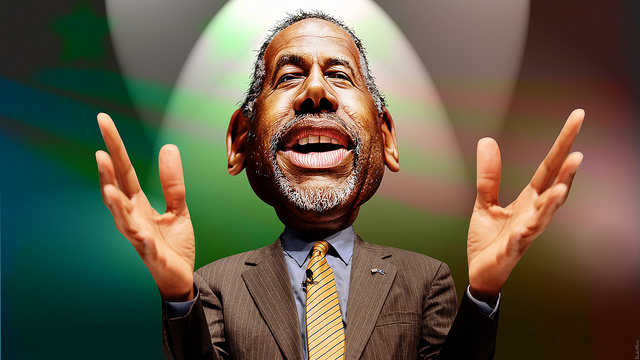 (This caricature of Ben Carson is by DonkeyHotey.)

Ben Carson has been having a feud with the media for the past few days. He thinks he's being picked on because the media is investigating some of the things he's claimed and written in his book -- and asking him questions about his past. He has even gone so far as to claim that no candidate (including President Obama) has been questioned (vetted) as harshly as he has been.

That is absurd, and may be the most ridiculous claim he has ever made (even more ridiculous than his claims that prison makes people homosexual, or that the pyramids were built by the biblical Joseph and used as grain storage facilities). No presidential candidate was more thoroughly vetted by the media than Barack Obama -- and several candidates in this election cycle have been treated more roughly by the media than Carson. In fact, I doubt that any of the major candidates (of either party) have been treated as gently as Carson so far.

He foolishly dared the media to find another presidential candidate that the media has treated as harshly as they've treated him (showing how out-of-touch he is with the real world). Well, NBC News took up that challenge. Here is some of their response:

After a week of intense scrutiny (on his views on the Egyptian pyramids, on whether he truly tried to stab someone, on whether he was offered a full scholarship to West Point), Ben Carson declared he had enough. "I have always said that I expect to be vetted. But being vetted and what is going on with me, 'You said this 30 years ago, you said this 20 years ago, this didn't exist, this didn't.' You know, I just, I have not seen that with anyone else," Carson told NBC's Chris Jansing. "Or if you can show me where that's happened with someone else, I will take that statement back." Well, here's our try: We found a combined 165 New York Times and Washington Post articles that were all (or partially) about Barack Obama and Jeremiah Wright between the time Obama first launched his presidential bid (Feb. 2007) and his 2008 victory (Nov. 2008). During that same time period, we found an additional 41 New York Times and Washington Post pieces on Obama and Bill Ayers. And from the start of her campaign (April 2015) until now, we discovered a combined 44 NYT/WaPo articles about Hillary Clinton and her email server. Our friend Chris Cillizza of the Washington Post even wrote a post entitled: "Why I've written 50 posts on Hillary Clinton's emails." Bottom line: When you're atop of the presidential polls, you're going to get scrutiny -- lots of it.

And while our system of picking a president is imperfect -- especially when it comes to the news media's role in it -- do realize this: It's maybe the closest simulation to actually being in the Oval Office. For all of the attention Obama received on Jeremiah Wright and Bill Ayers, those stories paled in comparison to the intense scrutiny of the BP spill, selling the health-care law, dealing with the HealthCare.Gov crash, and reacting to the party's 2010 and 2014 midterm losses. For George W. Bush, his presidency went through the ringer of the Iraq war, Hurricane Katrina, Harriet Miers, the Social Security-reform push, and the financial crash. So if you can't deal with the news media picking apart your autobiography and your past speeches, you probably won't be able to deal with the bad news that inevitably comes your way as president.

Frankly, I think Carson has shown us that he is too thin-skinned to be president. If he can't take the small amount of criticism that has come his way so far, he should probably drop out of the race -- because if it looks like he could actually win the GOP nomination in the future, the questions will get much rougher and more pointed. That is just what happens in our political system. And the media should be doing that. It is their job to make sure the voters are informed about the candidates -- not just on the issues, but also on what kind of people they really are.
Posted by Ted McLaughlin at 12:02 AM