We Need To Fix Our Racism Problem - But Probably Won't 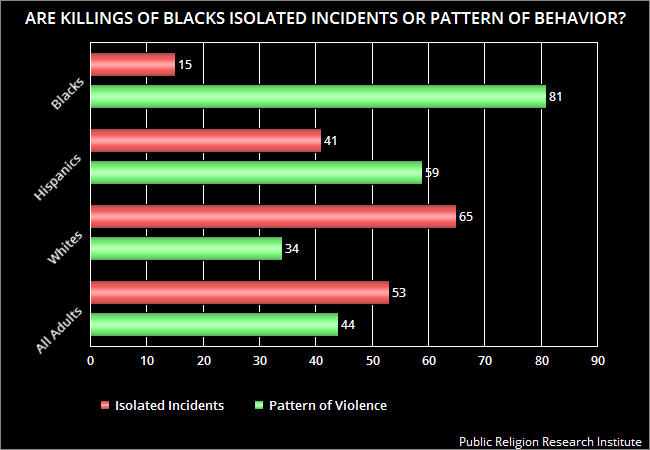 Here are a couple more charts from information in the Public Religion Research Institute's 2015 American Values Survey. This relates to race in the United States. Decent Americans will know that since the election of President Obama the racists have crawled back out from under their rocks. They feel emboldened by the attacks of the right-wing on the Black president -- and sadly have shown themselves to be far more numerous than many had expected.

A lot of Americans thought the nations' racial problems had been fixed with the passage of the civil rights laws in the 1960's. They were wrong. It is still a big problem in this country -- especially in our institutions (like the criminal justice system and the schools). Blacks (along with some Whites and other minorities) have recently began to demonstrate, and to ask for a new public debate on how to get rid of our lingering and substantial racism.

I was one of those who hoped this would set us on the right path to finally elimination racism. But this survey has shown that will be very difficult -- if not impossible. It seems that too many Whites in this country don't think we have a problem -- or even worse, think the problem is discrimination against them.

Yes, you read that right. About 43% of the adults in this country think Whites are discriminated against as much as Blacks and other minorities -- and among Republicans, that goes up to 64%. That tells me two things -- a lot of Whites think giving up their White privilege is discrimination, and there are a lot of racists in the Republican Party.

This simply makes no sense. What they are saying is that everyone is equally discriminated against in the United States, and that is simply impossible. There must be a privileged class to have discrimination, and like it or not, Whites are that privileged class. Rights are not a zero sum game. When you insure that minorities have rights, that does not take any rights away from Whites. What it does is remove the White privilege, which should never have existed in the first place -- and that is not discrimination. It is justice.

White also don't see the institutional violence in society. Note that most Whites think the police violence against Blacks is just isolated incidents -- not a pattern that exists throughout the country. They are wrong. There are just too many to be isolated incidents, and it is too widespread.

We need to eliminate racism in this country. But this survey convinces me that is unlikely to happen anytime soon. Whites are happy with the status quo, and nothing will change until they are willing to give up their White privilege.
Posted by Ted McLaughlin at 12:04 AM