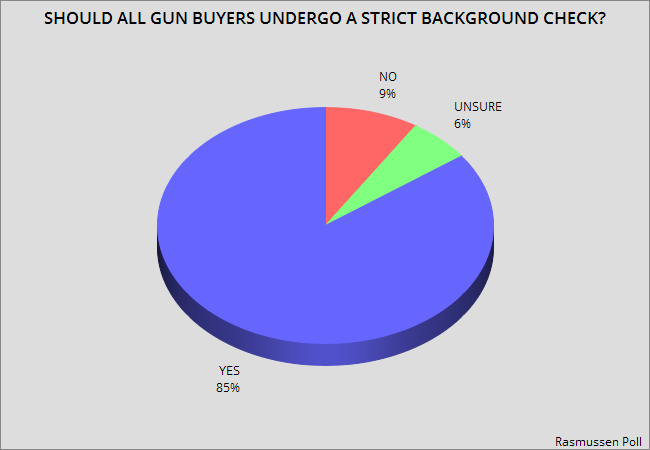 Poll after poll has shown that an overwhelming majority of Americans want the loopholes in the background check for gun buyers law to be closed. They know that about 40% of all gun sales in this country each year are done without any background check at all -- which means that any criminal, terrorist, or dangerously mentally ill person can legally buy any kind of firearm they want to have.

Now another poll verifies that again. It is the Rasmussen Poll -- done on November 1st and 2nd of a random national sample of 1,000 likely voters, with a margin of error of 3 points.

Note that it also says about 85% of Americans want every gun buyer to go through a strict background check. After all these polls saying the same thing, there is only one question left to ask -- Why won't Congress close those loopholes? It wouldn't even take any political courage, since such an overwhelming majority of voters agree with doing it.

The only thing I can come up with is that too many politicians (mainly Republicans, but also some Democrats) have been bought off -- either with under-the-table bribes, or with huge donations to their campaign funds from the NRA (which is just another kind of bribe).

It's time to vote these corrupt politicians out of office -- and elect some politicians who will do the will of the American people.
Posted by Ted McLaughlin at 12:08 AM