Graham Awakes To Reality And Drops Out Of GOP Race 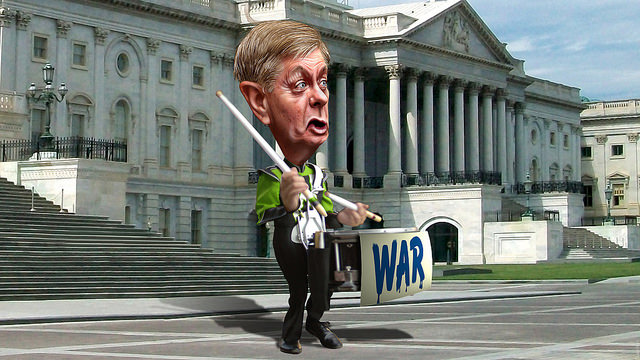 (This caricature of Lindsey Graham is by DonkeyHotey.)

A few months ago, there were 17 Republicans who thought they should be the GOP nominee for president in 2016. That number is now down to 13. Rick Perry, Scott Walker, and Bobby Jindal had already dropped out -- and on Monday, Lindsey Graham joined them. He has suspended his campaign after months of failing to get more than 1% support from his fellow right-wing Republicans.

Graham had based his presidential hopes almost exclusively on calling for a wider war in Iraq and Syria, spearheaded by a huge influx of American ground troops. Evidently he learned nothing from George W. Bush's ill-fated invasions of Afghanistan and Iraq. But his campaign never caught fire. I don't know whether it was because even the Republican base doesn't want another huge war with American ground troops, or whether they just don't want Graham as president.

Graham's campaign never got off the ground, and every poll noted his support was between 0% and 1% support. He complained about being relegated to the "kiddie table" in the GOP debates, but really was lucky to even be allowed there. He couldn't even get the Republicans in his own state to support him -- a sure prescription for a disastrous campaign.

Here is some of what he said in withdrawing:


Today I am suspending my campaign for president. I want to thank everyone who has taken this journey with me. You have honored me with your support. I believe we’ve run a campaign you can be proud of. We’ve put forward bold and practical solutions to big problems by retiring our debt and fixing our broken immigration system. This has been a problem solvers campaign.
However, the centerpiece of my campaign has been securing our nation. I got into this race to put forward a plan to win a war we cannot afford to lose and to turn back the tide of isolationism that was rising in our party. I believe we made enormous progress in this effort. Four months ago, at the very first debate, I said that any candidate who did not understand that we need more American troops on the ground in Iraq and Syria to defeat ISIL was not ready to be commander-in-chief. At that time, no one step forward to join me. Today, most of my fellow candidates have come to recognize this is what’s needed to secure our homeland.
I’m more confident today that our party will reject the Obama doctrine of leading from behind and will provide the strong leadership America needs to restore our military and take the fight to our enemies and do what it takes to make our country safe and preserve our way of life. This is a generational struggle that demands a strategy and the will to win. I will continue to work every day to ensure that our party and our nation takes on this fight.
I am suspending my campaign but never my commitment to achieving security through strength for the American people. God bless our fighting men and women and God bless America.
Posted by Ted McLaughlin at 12:02 AM