Now We Will See Who Really Controls The Republican Party 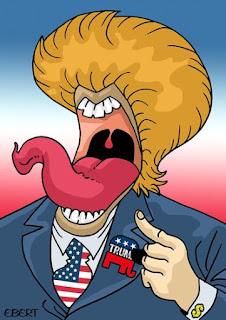 Donald Trump has been spreading hate for months now. In fact, he started his campaign on a hateful note by demonizing Mexican immigrants. And that hate has propelled him to the lead in the Republican race for the presidential nomination. He has tapped into the racism, bigotry, and xenophobia of many in the Republican base.

And most of his opponents in the GOP presidential race have avoided attacking Trump for his hate campaign -- partly because they share many of his odious views, and partly because they know many base GOP voters share those views (and they didn't want to alienate those voters).

That may have ended though. Trump's latest venture into hate politics, his proposal to ban all muslims from entering this country, seems to have drawn a line in the sand -- a line that separates Trump from some Republican officials and his presidential opposition. Here is what some of them had to say:

Reince Priebus (RNC Chair)
"I don't agree. We need to aggressively take on radical Islamic terrorism but not at the expense of our American values."

Dick Cheney (former vice-president)
"His whole notion that somehow we need to say no more Muslims and just ban a whole religion goes against everything we stand for and believe in."

Marco Rubio (GOP candidate)
"I disagree with Donald Trump's latest proposal. His habit of making offensive and outlandish statements will not bring Americans together."

Chris Christie (GOP candidate)
"Again, this is the kind of thing that people say when they have no experience and don't know what they're talking about. We do not need to endorse that type of activity, nor should we."

John Kasich (GOP candidate)
"This is just more of the outrageous divisiveness that characterizes his every breath and another reason why he is entirely unsuited to lead the United States."

Lindsey Graham (GOP candidate)
"If you want to make America great again, reject this without any doubt or hesitation."

But not all Republicans were willing to criticize Trump. Ted Cruz said, "I do not believe the world needs my voice added to that chorus of critics."

Cruz thinks Trump is right about the Republican Party -- that it is now controlled by the racists, bigots, and xenophobes. And believing that Trump will eventually fade, he wants to be the one that inherits the Trump voters.

The question, of course, is who is right. Does the Republican Party still have a tiny shred of decency left, or is it truly now controlled by the racists, bigots, and xenophobes? Many GOP leaders are betting the former is true, while Trump (and Cruz) are betting on the latter. The media pundits seem to think this may be the thing that causes Trump to start fading in the polls -- that he might have finally gone too far and will be rejected by the voters. I'm not so sure. Consider this chart from the Public Religion Research Institute's 2015 American Values Survey -- which seems to show Trump may be right. 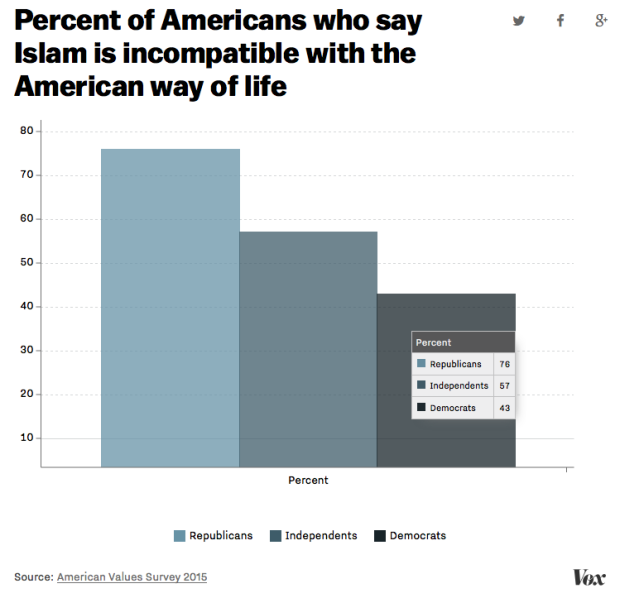 Currently Trump only has about a third of the Republican vote. That is not enough to win him the nomination. Will his bigoted statement increase his percentage, or will it cause that support to decrease? The answer will tell us a lot about the Republican Party. If his support decreases (or fails to increase), then we will know that most Republicans still retain at least a tiny shred of decency. If he support increases, then we will know that the party is now controlled by the racists, bigots, and xenophobes.

(The cartoon image of Donald Trump above is by Enrico Bertuccioli at cartoonmovement.com.)
Posted by Ted McLaughlin at 12:08 AM