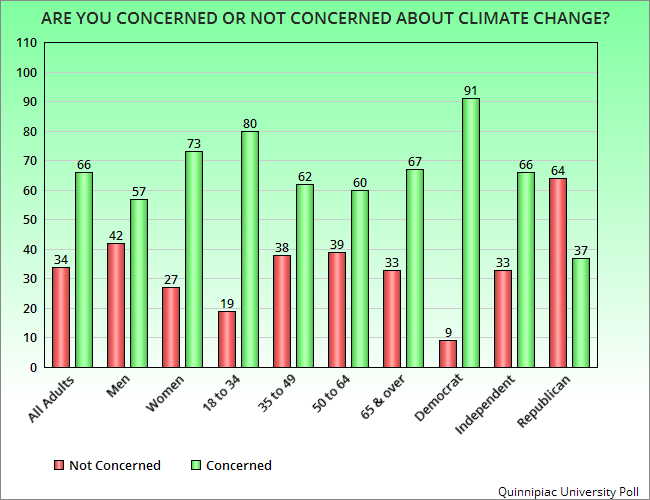 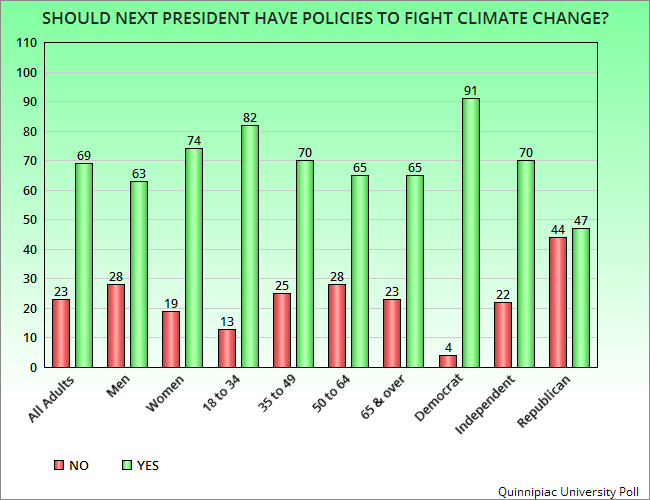 This past few days has once again made it clear that the climate is changing -- and it's not changing for the better. Seldom has almost the entire country seen bad weather at the same time, but it happened here at the end of 2015 (blizzards, floods, tornadoes, thunder storms w/heavy rains & high winds, etc.).

Fortunately, the public is concerned about the warming of the planet that is changing weather patterns (and making them more severe). Note in the top chart that a significant majority of the public (66%) say they are concerned about climate change -- and that includes significant majorities of every demographic group but one. Only Republicans claim not to be concerned -- evidently having drunk the denial kool-aid their party officials are selling.

And even better, it looks like the public wants the government to take action. About 69% of the public says they want the next president to institute policies to fight the climate change -- and that also includes significant majorities of all demographic groups (including a plurality of Republicans).

Elected Republican officials can continue their denials in an attempt to protect Big Oil and other polluters, but the public is no longer buying it. They want something done.

The charts above represent the results of a recent Quinnipiac University Poll -- done between December 16th and 20th of a random national sample of 1,140 registered voters, with a margin of error of 2.9 points.
Posted by Ted McLaughlin at 12:06 AM