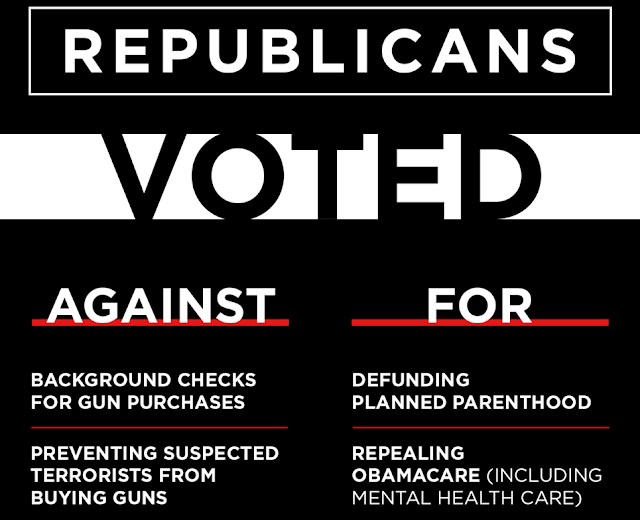 If you had any doubt that Republicans, especially elected officials, don't really care what the American public thinks or wants (but have their own agenda), that was made perfectly clear by a couple of votes in the U.S. Senate. In the last couple of days, the Republicans passed a bill the public is against, and defeated a bill that the public wants.

The bill they passed was one that would repeal the Affordable Care Act (Obamacare), and defund Planned Parenthood. The vote was 52 to 47, and followed party lines -- with almost all Republicans voting to repeal, and almost all Democrats voting against repeal. The GOP hailed it as a victory for the wishes of the American people -- but that was more than a bit disingenuous, since poll after poll shows a majority of Americans do NOT want Obamacare repealed. They want it to be improved, but they don't want it repealed. And several recent polls have also shown a majority of Americans support Planned Parenthood.

Between 80% to 90% of the American public (and even a majority of the GOP base) are in favor of closing those loopholes to avoid background checks -- but the Senate GOP didn't care. Their allegiance to the NRA and the gun manufacturers is stronger than their allegiance to the people (even those in their own base). They defeated the bill on a 45 to 54 vote -- again mostly along party lines. One Democrat (Heidi Heitkamp) voted with the Republican majority, and one Republican (Mark Kirk) voted with the Democrats.

The votes on these bills show they GOP is still against the desires of the American people. And when you consider they also want to privatize Social Security or cut its benefits, want to eliminate Medicare and putting seniors at the mercy of private insurance companies, want to overturn laws that would clean our air and water, want to give the rich and corporations more tax cuts, and oppose any effort to raise the minimum wage, I don't understand how any American could even consider voting Republican in 2016. All of those GOP stances are in opposition to the desires of the American people.
Posted by Ted McLaughlin at 12:04 AM