The First Clues To The Change In Representation In 2020 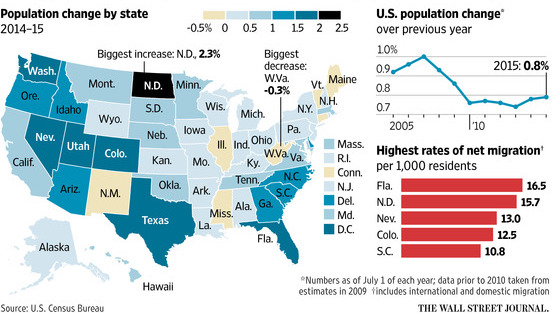 The chart above, from the Wall Street Journal, shows the change in population trends of the states. This is important because it will determine what states will gain or lose representation after the 2020 census.

It's still five years until the next census, and the coming Supreme Court decision on whether districts should be drawn on total population or the number of voters will undoubtably have an effect, but there will be winners and losers when it comes to the number of representatives each state will be apportioned.

I found this early look by the Wall Street Journal on the matter to be very interesting (and thought you might also). Here is their very early prediction:

In Washington, it’s never too early to think about the next congressional reapportionment.

That’s why Tuesday’s release by the U.S. Census Bureau of state-by-state population changes sparked instant predictions about which states will gain and lose House seats after the 2020 census. That pie of 435 seats gets recut every 10 years based on whether states swelled or shrank, and the number of House seats and presidential electoral votes for the states shift accordingly.

Election Data Services, a political consulting firm in Manassas, Va., tallied the rates of state population change from 2010 to 2015 and projected them forward to 2020. If those trends hold up, 15 states would gain or lose districts after the 2020 census.

The biggest gains would come to Texas, which is projected to clinch three more House seats, and Florida, a gainer of two seats. Arizona, North Carolina, Colorado and are all poised to grab one seat after 2020.