The Transformation Of The U.S. Into A Fascist Nation 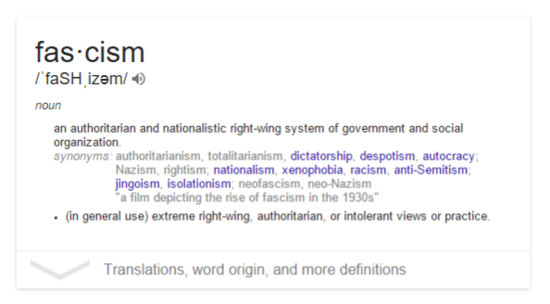 The following post is by Mark Sumner at Daily Kos. It paints a frightening picture of what is happening in the United States -- but I believe a valid picture. It's well with reading.

Sixty million people died in World War II, but fascism won. It didn’t win on the battlefield. It didn’t win right away. It won because the same fears, the same greed, the same hatred that fueled its growth in the first part of the twentieth century never went away. The symbols of fascism became anathema, but the causes … went deep. And gradually, slowly, one step at a time, all those vices became first tolerated, then treated as virtues, and then as the only acceptable view.

Godwin’s Law—the contention that any argument will eventually come round to warnings about Hitler—is twenty-five years old, but for much longer than that, we’ve been taught that the use of that... f-word, is not to be taken seriously. Sure, every government program, new or old, is open to accusations of communism and warnings of a slippery slope toward some failed dictatorship. That’s expected. But to even acknowledge our long, stumbling lurch to the right; the building force of corporate power; the relentless need for war; a police whose power of enforcement is divorced from law; a preening nationalism that rewards the full rights of citizenship only to those who fit an ever-narrower mold… You can’t call it fascism. People will only laugh.

After all, what politician could be taken seriously who didn’t accept the completely middle of the road position that we should value the safety of the populace over the preservation of rights? Forget that oath. The top job of the president is to keep the American public safe, no matter what that takes.

Even when doing that job means abandoning families left destitute by war.

That drive for safety über alles means that we must surrender our privacy to the state censors who read everything we write, listen to everything we say, view every transaction we make, without a warrant and keep doing it even when they say they’re not.  It means that we have a police that makes use of tanks and other military gear to invade the homes of ordinary citizens, and where police take more property than criminals without convictions, or even charges.

Now we’ve come to an election year in which the promise of surveillance of those who follow the wrong religion, internment camps, torture and racism, racism, racism is not just a strategy, but a winning strategy.

There are a thousand definitions for fascism, most of them concocted simply to show that what you’re doing isn’t a step in the direction of fascism, but what that other guy proposes certainly would be. But I’m not saying we’re moving toward fascism. I’m saying we started that drift a long time ago, and now we’re well across the line. We started by labeling minorities in our own cities as "welfare queens" and constructed a mythology that drove a wedge through our nation. We started by equating democratic action with sure failure, and elevating capitalism into a cause. We started … and we kept going.

We went there when we we turned greed—the kind of sick, envious greed that makes people value the rich over the poor and corporations over individuals—into not only a virtue, but a cornerstone of our nation cemented in place by repeated Supreme Court rulings that certify the preeminent position of wealth and corporate power.

We went there when we turned nationalism—blind prejudice against those who don’t conform to the image of “us”—into a flag-waving patriotism that’s expressed in calls to enforce state religion and turn even those born here into “other” if they don’t have the right skin tone. We went there when we used that nationalism to fuel unwarranted invasions that destabilized huge portions of the world and directly drove the terrorism that we’re now using to fuel yet more nationalism and more attacks and more terrorism and more nationalism in an insane, self-reinforcing loop.

We went there when we turned fear—quivering, knock-kneed jittery cowardice—into the illusion of “being tough” by throwing our freedoms away in double handfuls. It was that fear (and keen lobbying from defense contractors) that caused us, with no justification whatsoever, to begin funneling military equipment into our police forces, and to replace "protect and serve" with "dominate and control."

This is a year in which not only the leading candidate for the GOP nomination, but all major candidates have favored building a "permanent border wall" separating America from neighboring nations and justifying this wall on the basis of racist caricature of immigrants. A year where the idea of internment camps isn't restricted to the GOP. It’s a year in which protests have been met by tanks. In which reason is decried as weakness. In which we’ve taken all our worst instincts, and held them up proudly.

Sinclair Lewis never actually said “When fascism comes to America, it will be wrapped in the flag and carrying a cross, ” but he should have. And he should have mentioned that no one would dare speak its name. 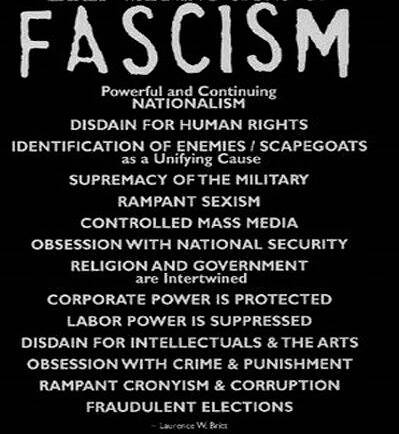