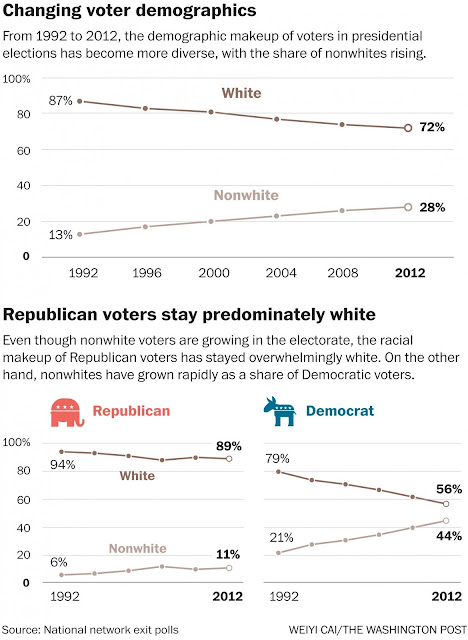 I have spoken of this before, but these charts (from The Washington Post) make the problem facing the Republican Party perfectly clear. They have a demographic problem, and that problem grows worse in each election. The proportion of the electorate that is White is shrinking. It has already dropped from 87% in 1992 to 72% in 2012 -- a drop of 15% in the last twenty years. And there's no doubt the White percentage will be smaller in 2016, and keep on getting smaller.

The Democrats have recognized this, and they long ago opened their party to minority participation. They have dropped from a 79% White party in 1992 to a 56% White one in 2012 (a 23 point drop) -- and that coalition of Whites and minorities has worked very well for them in national elections. But the Republicans are not experiencing that kind of change. They were 94% White in 1992, and are still 89% White (a drop of only 5%).

It doesn't have to be this way. Republicans could reach out to minorities by changing their current anti-minority polices. But they don't want to do that. They have too many xenophobes, bigots, and racists in their party base. This started with racist flight from the Democratic Party after the Civil Rights laws were passed in the 1960s. The Republicans eagerly accepted these racists (and indeed, this racist flight turned the South from predominantly Democratic to predominantly Republican).

That was OK for the GOP as long as Whites made up the huge majority of the electorate, but now that the White majority is shrinking, it is becoming a big problem -- a problem the racist and bigoted base won't let them solve. This puts them between a rack and a hard place. They must change, or grow more irrelevant with each passing election -- but if they change, they will lose a significant portion of their current base.

This is a problem of their own making, and it will be interesting to see how they address it (or if they are able to address it at all).
Posted by Ted McLaughlin at 12:06 AM