Wendy Tries To Explain Her Insane Gun Position In 2014 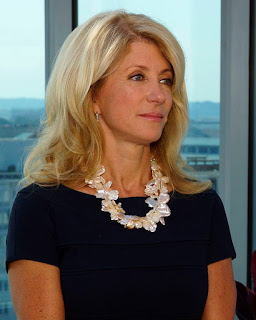 This picture (by Kevin Sutherland in 2013) is of Wendy Davis -- the Democratic nominee for governor in Texas in the 2014 election. Progressives across the state cheered when she was nominated. We thought we finally had a statewide candidate who was not afraid to campaign as a real Democrat (on progressive principles). After all, she had made a courageous stand in filibustering an odious GOP law that would close most of the state's abortion clinics just the year before.

But it didn't take long for her to disappoint many of her progressive supporters. She caved to the gun lobby, and said she supported allowing citizens to openly carry handguns (and other firearms) in public -- a position that made no sense in light of the enormous gun violence that plagues this country.

She now says she regrets taking that position, and in an article for Politico, tries to explain why she made that decision. Here is what she said:

I am a lifelong Democrat. I proudly boast an “F” rating from the NRA. And, yet during my 2014 gubernatorial campaign in Texas, I supported the open carry of handguns in my state.

It is a position that haunts me.

Every few months, on the heels of a shooting that devastates a different corner of America, we find ourselves arriving at exactly the same place: Republicans offer their prayers; some offer up the idea of focusing our attention on mental health; almost none of them mention guns. Democrats talk background checks, magazine limits, closing the gun-show loophole and, ultimately, get exasperated. In the wake of the San Bernardino and Planned Parenthood shootings, the conversations we’re having now are almost exactly the same. Meaningful gun reform still seems as distant as it did when the Manchin-Toomey bill, which would have required background checks on all commercial gun sales, failed in 2013, mere months after 20 children and six adults were killed in a mass shooting in Newtown, Connecticut.

As baffling as this would appear to an outside observer, I know why we keep ending up here. I know why because, even with my history of supporting sensible gun laws, I was cowed by the political realities of my state. Me, a Democrat who wasn’t afraid of making waves when it came to strapping on a pair of pink sneakers as a state senator and filibustering an anti-abortion bill for 13 hours. I might be doggedly progressive most of the time, but when it came to staking out my position on the open carry of handguns in a red state, none of that mattered.
I vividly recall where I was when I hatched the idea for the open carry position I ended up taking. It was a late night in February 2014, and I was bone-tired after finishing fundraising in Colorado. Standing in the noisy, crowded TSA screening area of the Denver airport, I received a call from my strategy team back home. My opponent, the current Gov. Greg Abbott, had staked out his position in support of the open carry of handguns and I was being asked to stake mine out as well. Ever since I had announced my run the prior October, we had known this day, when I would have to declare my stance on this issue, would likely come. In every previous conversation that I had had with my team about open carry, I had been resolute in my opposition to the policy. Still, their concern that the issue threatened to “suck the oxygen” out of the conversation on other issues was a worry for me too.

Texas has some of the most lax gun laws in the country, with no minimum age requirements for possessing a firearm and no waiting period requirements. When I was running for governor, passage of open carry and campus carry in a state as gun-loving as Texas was just about all that the gun lobby there had left to achieve. Although federal gun laws place no restrictions on the open carry of handguns, six states, including Texas, had banned the practice since the Civil War. Open carry of long-barreled guns had always been allowed, and open carry advocates had taken to the intimidating practice of gathering in public places with shotguns and rifles strapped across their chests as an expression of support for extending that right to handguns. The issue had been heating up in the months prior to my decision, with several demonstrations in my home district of Tarrant County.

I wanted the campaign conversation to be about education funding, equal pay for women and access to healthcare—not guns. But this was Texas. Fifty-eight percent of voters in the state think gun restrictions should be either loosened or left alone. Texas is home to more licensed gun dealers than any other state in the country, and Lone Star Sen. Ted Cruz tops the list of senators who have received the most money from the NRA. The gun lobby reigns supreme in the state legislature and has the power, at a moment’s notice, to rile up its passionate member base. Earlier this year, the state house passed a bill to allow members to install panic buttons in their offices after open carry advocates confronted a lawmaker in his.

Members of my team had long memories of what it meant to go against these folks, having watched Democrat Ann Richards lose her 1994 gubernatorial re-election campaign after she vetoed a concealed carry bill. In the wake of that election, it became conventional wisdom that vetoing a gun bill would bring a Texas governor’s career to an end—the “Ann Richards Rule,” as it became known in the state’s political parlance. At a packed campaign event in deep-blue Travis County, I posed for a photo opportunity after Ann Richards’ adult children gave me her shotgun—a keen reminder of how fresh the lessons from that loss still are, especially for Texas Democrats.

Against that backdrop, I chose to do something that was cleverer than it was wise. I decided to take a position in favor of open carry, one which would include the caveat that any property owner who wanted to opt out should be able to do so, whether it be a school, hospital or a private business. Understanding that most of these property owners would likely take advantage of an opt-out provision if the legislature were ever even to agree to pass such a diluted version of the law, I thought I could go forward with a clear conscience.

Such was the dictate I gave my team from the Denver airport. But, as I hurriedly finished the conversation before boarding the airport terminal train, I couldn’t shake the shameful feeling that I had just done something I had never done before—I had compromised my deeply held principles for the sake of political expediency.
Posted by Ted McLaughlin at 12:02 AM