It's Silly To Use "Single-Payer" Expense Against Sanders 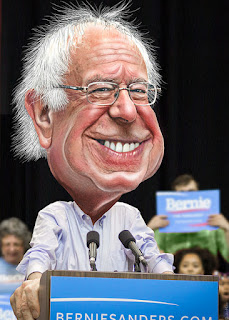 As regular readers of this blog will know, I am a staunch supporter of Hillary Clinton for the Democratic presidential nomination. However, I think the Clinton campaign is making a silly (and rather disingenuous) mistake in attacking Bernie Sanders for his support of a single-payer health insurance system (like a Medicare for all system).

Both Hillary Clinton and her daughter Chelsea have recently attacked Sanders about this. They have accused him of trying to dismantle Obamacare, and of supporting a system that would be prohibitively expensive for Americans.

The first argument is just stupid. Sanders has always voted to support Obamacare, and would not dismantle it. He just wants to improve on it by going to a government-run single-payer system -- a system that would cover all American citizens, instead of just most of them (as Obamacare does).

Also ridiculous is the argument that a single-payer system would be too expensive. the truth is that it would probably be less expensive than our current system of private insurance coverage -- primarily because it would take the profit out of the system, and only spend to provide healthcare (not line the pockets of rich private insurance companies). Both our own Medicare system (which has shown itself to be far more efficient than private insurance) and the single-payer systems of other countries (where much less is spent on medical care per capita) shows this. And if that single-payer system is allowed to negotiate with drug companies and health providers (something Medicare can't do by law), even more money could be saved.

They are also questioning how a single-payer system would be funded. I don't know how Sanders proposes to fund it, but I am convinced it could be funded through a system of both payroll taxes and business taxes. And both would save money. Businesses would pay less for their share of a single-payer system than they currently pay to insure their workers with private insurance, and those who currently buy their own insurance would save big money by just paying a small payroll tax. The small payroll tax would affect some workers, but even they would save overall by not having co-pays and deductibles.

I believe there are many arguments for supporting Clinton instead of Sanders in the Democratic primaries -- but Sanders support for a single-payer system is not one of them. And the Clinton campaign would do well to drop this silly argument immediately.

(The caricature of Bernie Sanders above is by DonkeyHotey.)
Posted by Ted McLaughlin at 12:08 AM