We are only a few days away from the start of the delegation selection process for each party's presidential nomination. Iowa will caucus to select delegates on February 1st -- and New Hampshire will hold its delegate-selection primary on February 9th.

This is traditional that these two states go first, and has been the case for many decades now. Some say though, that this is a tradition that has run its course, and should now be changed. These states are not representative of many other states -- having small and mostly white populations.

Should this be changed? Would Americans support a change, or do they want to stick with tradition? The folks at the Morning Consult Poll decided to find out. They questioned a random national sample of 2,028 registered voters, and their survey has a margin of error of 2 points.

It turns out that a majority of Americans think Iowa and New Hampshire should not retain their "first states" status in the caucus/primary nominating system. About 50% of all Americans would support a change, while only about 16% wanted to keep things as they are. And that view includes a majority or plurality of all political groups and regions of the country. 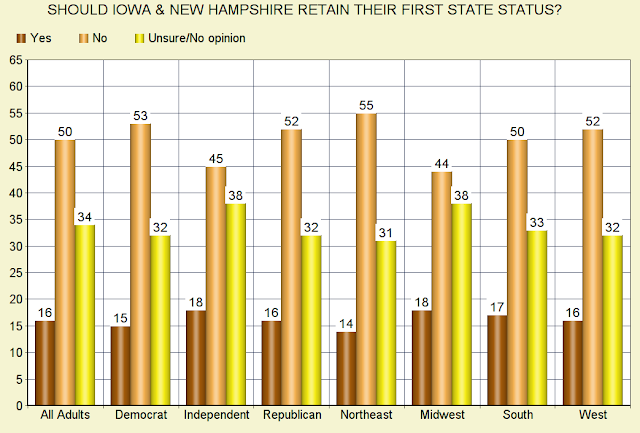 So what would the change be that people would support? The poll asked respondents if they would support each of three alternatives -- having a nationwide poll on the same day, rotating which states would be the first to vote, and having regional primaries. Voters liked all three of the alternatives. About 65% supported a national primary, 63% supported a rotation of the states, and 55% supported regional primaries. And that feeling generally also crossed all political lines and regions of the country.

Personally, I like the idea of regional primaries/caucuses -- and would like to see the regions rotated as to which would be first and last. I would shove them back to at least the middle of March (or the first of April), and then have one every two weeks. What do you guys think? Is that a crazy idea? Do we even need a change (and would you support a change)? Would changing the system make it fairer, or not? 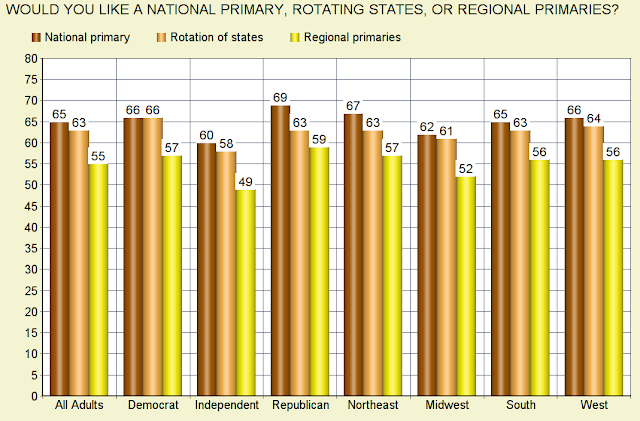