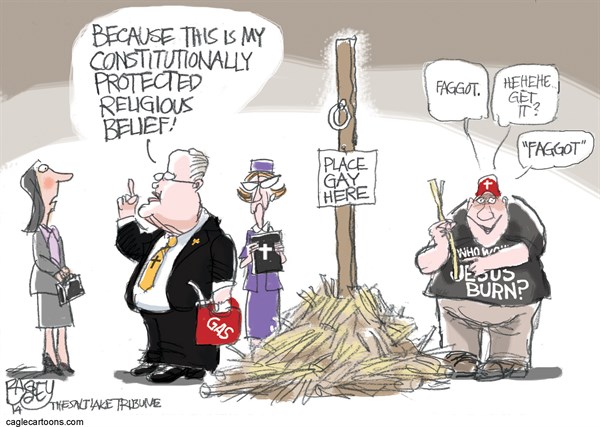 (Cartoon image is by Pat Bagley in the Salt Lake Tribune.)

Governor Nathan Deal recently vetoed a "religious liberty" law in Georgia. Right-wing politicians, playing to their bigoted base, had passed the bill saying it was to protect the rights of the religious. But what it really did was to make discrimination of the LGBT community legal under the guise of protecting religion (particularly the christian religion).

Making, or keeping, discrimination legal is something that should offend all decent Americans. We like to claim we live in a country that guarantees equal rights to all citizens, but legalizing discrimination against any group goes against that very fundamental belief in equal rights. It should be anathema to anyone believing in the Constitution.

Fortunately, many people (even conservatives) see through the religious liberty laws (which are being proposed in many states), and see them for what they are -- an effort to legalize discrimination. Consider this editorial from the Waco Tribune -- a conservative newspaper in a very conservative part of Texas.


This newspaper normally has little interest in what’s happening in Georgia, but Texans should closely eye Republican Georgia Gov. Nathan Deal’s gutsy veto of an anti-gay bill this week, given that some lawmakers in our state contemplate similarly discriminatory legislation under the guise of “religious liberty.” Georgia’s pro-business sector lobbied hard for the governor to kill this bill, arguing its discriminatory passages would hurt the state’s economy, send industry packing and kill jobs.
One doesn’t have to embrace, let alone condone, the gay lifestyle to recognize the potential for mischief in such legislation. The measure vetoed by Deal might have allowed agencies supported to some degree by taxpayer dollars — homeless shelters and drug-counseling centers, for example — to refuse service to gay individuals and same-sex couples. It also included language that might have allowed hospitals to refuse treatment to such individuals.
Many of us understand guaranteeing religious liberty, including measures such as the Pastor Protection Act passed last year by the Texas Legislature. It allows pastors, priests, rabbis and imams the right to refuse conducting marriage rites of those who do not subscribe to certain tenets of their faiths, however narrow they might seem. However, expanding this idea into a largely secular arena involving taxpayer-supported institutions such as homeless shelters and hospitals opens up the potential for discrimination on a scale no true patriot should tolerate.


Our nation has struggled since its founding to free itself of discriminatory practices. Dressing discrimination up in the solemn guise of “religious liberty” — formerly employed to keep people of different colors from marrying — is an old, hate-filled ruse that doesn’t fool anyone, least of all those adroitly trying to claim their religious values are threatened by others doing them no harm.
Posted by Ted McLaughlin at 12:02 AM