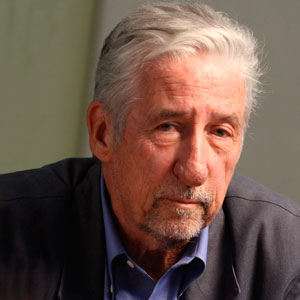 Tom Hayden (pictured here is a photo from tellingstories.org) was one of the leaders of the student revolutionary movement of the 1960's and 70's. He was one of the founders of Students for a Democratic Society (SDS) and served as its president, and he was a freedom rider in the civil rights movement. His leftist credentials are impeccable, and he continues to support progressive ideals and movements.

One might think he would naturally be a supporter of Bernie Sanders in this presidential campaign -- and he initially was. But he has switched his support to Hillary Clinton. Why? Here is some of what he had to say about that in The Nation:


﻿Voting on June 7 is a personal responsibility for myself and other Californians, just as it is for my friends and colleagues in New York on April 19. What is to be done in this agonizing situation? I still believe a united front against the Republicans is the best and most necessary strategy. But I can’t vote for a united front on June 7.
I intend to vote for Hillary Clinton in the California primary for one fundamental reason. It has to do with race. My life since 1960 has been committed to the causes of African Americans, the Chicano movement, the labor movement, and freedom struggles in Vietnam, Cuba and Latin America. In the environmental movement I start from the premise of environmental justice for the poor and communities of color. My wife is a descendant of the Oglala Sioux, and my whole family is inter-racial.
﻿What would cause me to turn my back on all those people who have shaped who I am? That would be a transgression on my personal code. I have been on too many freedom rides, too many marches, too many jail cells, and far too many gravesites to breach that trust. And I have been so tied to the women’s movement that I cannot imagine scoffing at the chance to vote for a woman president. When I understood that the overwhelming consensus from those communities was for Hillary—for instance the Congressional Black Caucus and Sacramento’s Latino caucus—that was the decisive factor for me. I am gratified with Bernie’s increasing support from these communities of color, though it has appeared to be too little and too late. Bernie’s campaign has had all the money in the world to invest in inner city organizing, starting 18 months ago. He chose to invest resources instead in white-majority regions at the expense of the Deep South and urban North.
Bernie comes from a place that is familiar to me, the New York culture of democratic socialism. From the Port Huron Statement forward, I have believed in the democratic public control of resources and protecting the rights of labor. My intellectual hero is C. Wright Mills, a Marxist who broke with what he condemned as the stale “labor metaphysic” of the communist and socialist parties, embracing instead an international New Left led by young middle-class students around the world. Mills was fresh, honest, and always searching. The 1962 Port Huron Statement declared that we needed liberals for their relevance in achieving reforms, and socialists for their deeper critique of underlying systems. We did not declare ourselves for socialism but for a massive expansion of the New Deal, combined with an attack on the Cold War arms race. We called for a basic realignment of the Democratic Party through the force of social movements, but not through a third party. We even went “part of the way with LBJ” in the face of the 1964 Goldwater threat. From there the Democrats divided over race and Vietnam, eventually leading to Nixon. Even in the ’80s and ’9os, our campaign for “economic democracy” chose not to identify as a socialist movement. With the coming of the 2008 Wall Street crash and Bernie’s campaign, our political culture has changed profoundly in its tolerance of socialist ideas. But is it enough after this truly divisive primary season?
I wish our primary could focus more on ending wars and ending regime change too, issues where Bernie is more dovish and Hillary still harbors an inner hawk. Both Bernie and Hillary call for “destroying” ISIS, whatever that might mean—but it certainly means we are moving into yet another “war presidency.” At least there is strong bipartisan opposition to the open-ended deployment of troops on the ground. But Hillary’s penchant for intervention and regime change can only be thwarted by enough progressive Democrats in Congress and massive protests in the streets and online. Neither candidate so far is calling for the creation of a new peace movement, but that’s the only way to check the drift into another war.
So here we are, at the end of one generation on the left and the rise of another. Both camps in the party will need each other in November—more than either side needs to emerge triumphant in the primary. We still need the organizing of a united front of equals to prevail against the Republicans. It will take a thorough process of conflict resolution to get there, not a unilateral power wielding by the usual operatives. It’s up to all of us.
Posted by Ted McLaughlin at 12:02 AM