Clinton Has Received The Most Negative Media Coverage 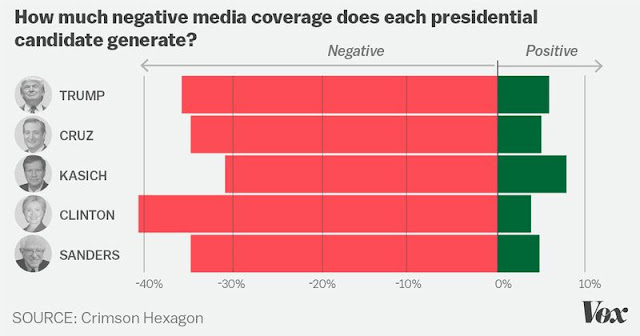 Bernie Sanders has come up with a whole host of excuses as to why he is losing the Democratic presidential nomination -- DNC favoritism, closed primaries, super delegates, Southern primaries, and (one of his favorites) media coverage. None of them are true. He is losing because he received fewer Democratic votes (about 3 million less), won fewer delegates, and won fewer states.

The media excuse doesn't fly either. The good folks at VOX have given us the chart above from Crimson Hexagon (who did a study on the media coverage of the last five candidate of both parties between January 1st and April).

Sanders needs to stop whining. Clinton has not just beaten him fair and square -- she has done it in spite of all the negative media coverage (and fewer positive media stories).
Posted by Ted McLaughlin at 12:06 AM