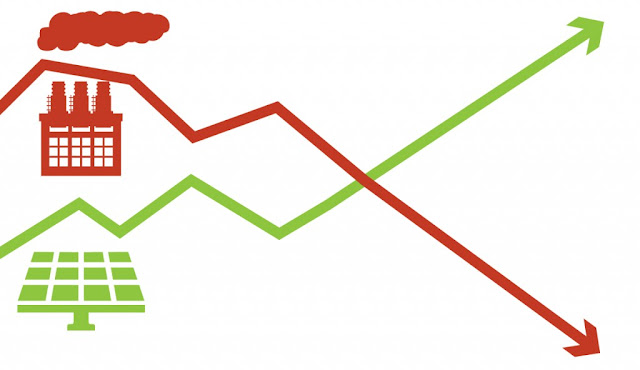 (Graphic is by Dylan Petrohilos at Think Progress.)

But in spite of the worst efforts of the congressional Republicans, a green energy revolution is happening in the United States. It would happen faster without GOP obstruction efforts, but they have been unable to stop it.

Here is how Samantha Page at Think Progress describes the growing energy revolution:


The energy mix in the U.S. is changing — and two separate events this week point to how we’re getting more green energy and less of the dirty stuff.
To start, there are now more than a million solar installations across the United States, including on nearly 950,000 homes and small businesses. This is a big deal. Right now, U.S. solar is generating the amount of electricity used by the entire state of Pennsylvania. And that contribution is only growing: By the end of 2016, there will be twice as much solar as there was in 2014.
The solar boom has been driven largely by individuals and companies (we’re looking at you, Apple and Google) who want to use clean, renewable energy. They are getting the message that solar is better for the planet — but it’s also proven to be a savvy investment. Through policies that pay customers back for the electricity they put on the grid, paired with an investment tax credit designed to help level the playing field, many Americans have seen significant returns on their investment in solar. 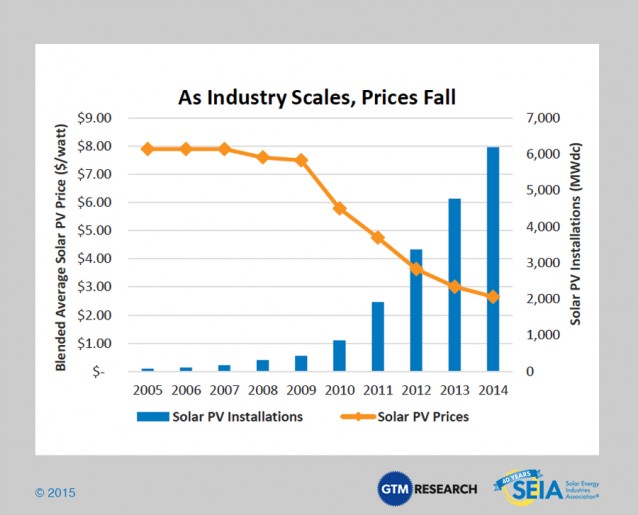 “The first big barrier for solar was that it was really much more expensive,” Adam Browning, executive director of Vote Solar, a California-based advocacy group, told reporters on a call Wednesday. But through incentives and market-based policies, the economic landscape has changed, he said. “The whole premise here is that through scale you bring down cost, and that’s exactly what has happened.”
Solar still makes up a tiny fraction — just over 1 percent — of the electricity used in the United States, but last year, for the first time ever, it was the largest source of new generation.
Where we get our power, then, is changing. It has to.
The electricity sector is the single largest source of greenhouse gas emissions in the United States, responsible for a third of the country’s emissions, according to the EPA. This is due largely to our reliance on coal-fired power plants — but that, too, is changing.
This week saw the announced retirement of coal-fired generators at two power plants in Illinois, which brings the tally of closed (or closing) coal generation to 100 gigawatts worth since 2010, according to the Sierra Club, which has focused on limiting and now reducing coal use since 2002.
Reducing coal use is critical to meeting the country’s emissions goals, including the ones outlined by the Clean Power Plan and international commitments under the Paris agreement, Bruce Nilles, senior director of the Sierra Club’s Beyond Coal Campaign, told ThinkProgress. “Getting coal replaced with clean energy is the lion’s share of how we get there,” Nilles said.
And the transition to clean energy doesn’t just mean less greenhouse gas emissions. The reduction in coal use for just the first 100 GW is also going to prevent 100,792 asthma attacks, 9,420 heart attacks, and 6,097 premature deaths each year, the Sierra Club calculates.
Historically, coal has been a big part of the United States’ electricity generation. In 2011, it dropped below 40 percent of generation for the first time since 1978. In 2015, coal was only 33 percent of generation.
“Solar, three years ago, was barely registering at all,” Nilles said. “Wind was beginning to get taken seriously.” Now, both of those industries are much more established. Earlier this month, Berkshire Hathaway-owned MidAmerican Energy announced it is adding another 2 GW of wind power to its portfolio — without raising electricity rates. The company has a stated goal of 100 percent renewable energy. Iowa has embraced wind power, getting 31 percent of its electricity from the prairie winds.
Iowa has no coal, natural gas, or oil, Nilles explained. “They have a situation for decades where they have been shipping money out of state,” he said. “The vast majority of people are asking: Why aren’t we doing more of this?”
Posted by Ted McLaughlin at 12:02 AM