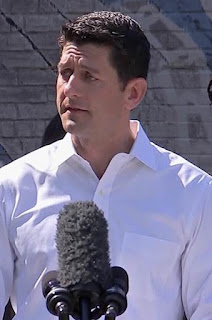 "Claiming a person can't do their job because of their race is sort of like the textbook definition of a racist comment."

Those are the words of Republican Speaker of the House Paul Ryan. He was talking about Donald Trump's assertion that the judge presiding over his trial regarding the fraudulent Trump University could not be fair because he has a Hispanic heritage (though born in the U.S.).

And Ryan is not the only Republican coming out in opposition of Trump's despicable statements. Dozens of GOP officials and prominent Republicans have tried to distance themselves from Trump's comments. They are beginning to realize that their party has nominated a racist.

They have tried to get Trump to back off his statements, and apologize -- but Trump has refused. Trump seems incapable of apologizing, and has in fact, doubled down on his racist comments -- now including muslim judges as others that would not give him a fair trial.

But guess what. All of those Republican say they still support Trump's presidential bid. Ryan says that is because they have a better chance to impose their policies on this country if Trump is elected -- policies like more tax cuts for the rich and corporations, keeping the minimum wage at its current level (or eliminating it), weakening unions, cutting Social Security benefits and raising the retirement age, privatizing Medicare, repealing Obamacare (even though they have no replacement for it), opposing climate change solutions, and allowing corporations to continue exporting American jobs.

Also, many of them are running scared of the racist base of their own party. They are afraid if they oppose Trump too strongly on his racism, the Trump voters (a majority of their party) will punish them at the polls next November.

(The photo of Paul Ryan above is from nbcnews.com.)
Posted by Ted McLaughlin at 12:06 AM