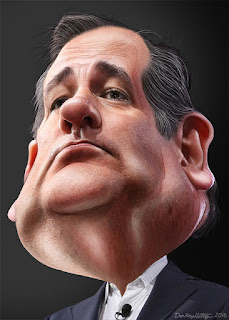 This Republican convention has been a mess. On every night, there has been some kind of screw-up that seems to point out the incompetence of those running the convention (the Trump forces). On Wednesday night, it was the speech of Ted Cruz.

Trump gave all his opponents in the primaries a chance to speak at the convention -- at least the ones that wanted to be there. And all of them, if not outright endorsing Trump, at least said they would vote for him -- all but one. Ted Cruz jumped on the opportunity to speak at the convention, but made it clear in his speech that he does not endorse Trump, and might not even vote for him. He ended the speech by telling Republicans to vote their consciences (a thinly veiled jab at Trump).

The speech angered the convention-attendees, and they effectively booed Cruz off the stage. The blowback didn't stop there. Both convention delegates and many party officials attacked Cruz for his obviously anti-Trump message in a convention that was supposed to unify the party.

I think Cruz was a bit surprised at the depth of negative feelings brought against him. And he floated an excuse the next morning -- telling the Texas delegation that he could not support anyone who had insulted his wife and father. That was a rather pathetic excuse. Trump, at some time during the campaign, insulted all of his opponents -- but they all put it behind them, understanding that it was just a part of today's negative political campaigning.

I think Cruz  also understands that, but was trying to deflect some of the criticism he didn't expect. It was pretty obvious what Cruz was really trying to do with his speech -- position himself as the leading candidate for the 2020 GOP nomination. Cruz expects Trump to lost the 2016 election, and wanted to position himself as the 2020 frontrunner. But he didn't expect the huge negative blowback from his speech.

The real question now is -- has Cruz committed political suicide, or was his speech a smart move? I don't think we know the answer yet. It will depend on how the November election comes out. If Trump is blown out by Hillary Clinton, then the right-wing base of the party might see Cruz as a prophet (and flock to support him). But if Trump loses in a very close election, many in the party base are going to be looking for a scapegoat, and Wednesday's speech makes it likely that Cruz will be that goat.

Cruz made a bold political move with his Wednesday speech. We'll have to wait and see whether that bold move was a smart one or a stupid one.

(NOTE -- The caricature of Tex Cruz above is by DonkeyHotey.) 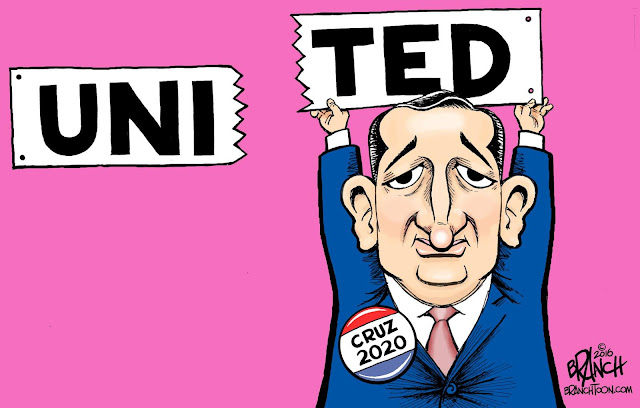 (Cartoon image is by John Branch at branchtoon.com.)
Posted by Ted McLaughlin at 12:08 AM