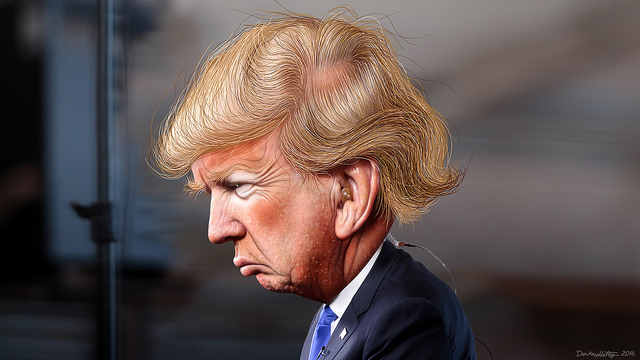 (Caricature of Donald Trump is by DonkeyHotey.)

Campaign finance law is very clear. Political candidates cannot receive any donations from residents of another country. In fact, the only people who can donate money to a political campaign are those living in this country -- and they must either be citizens or have a legal "Green card". This is to prevent foreign nationals (especially rich ones) from having any effect on our elections.

That is not hard to understand, and it is to be expected that all candidates (especially those running for president of this country) would know and respect that law. But Donald Trump and his aides either don't know what the campaign laws are, or they don't care what they are -- maybe both.

There is indisputable evidence that the Trump campaign has sent fund-raising letters to people in other countries -- the United Kingdom, Iceland, and Australia. Now it looks like Trump is in trouble because of this illegal fund-raising. Two campaign watchdog groups, the Campaign Legal Center and Democracy 21, have filed complaints with the FEC.

The FEC needs to come down hard on the Trump campaign, because this is a law that must be strictly enforced to protect the sanctity of U.S. elections.
Posted by Ted McLaughlin at 12:04 AM