(Photo of Hillary Clinton is by Kat Kane from the website hillaryclinton.com.) 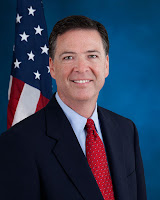 Director James B. Comey (pictured) has released the official FBI report on the so-called "e-mail scandal", and as expected, there will be no charges. Right-wing Republicans are whining loudly. They were hoping for something -- anything -- that would help them beat Clinton in the November election. They didn't get it.

Here are some excerpts from the FBI report:


Our investigation looked at whether there is evidence classified information was improperly stored or transmitted on that personal system, in violation of a federal statute making it a felony to mishandle classified information either intentionally or in a grossly negligent way, or a second statute making it a misdemeanor to knowingly remove classified information from appropriate systems or storage facilities.
Consistent with our counterintelligence responsibilities, we have also investigated to determine whether there is evidence of computer intrusion in connection with the personal e-mail server by any foreign power, or other hostile actors. . .
In our system, the prosecutors make the decisions about whether charges are appropriate based on evidence the FBI has helped collect. Although we don’t normally make public our recommendations to the prosecutors, we frequently make recommendations and engage in productive conversations with prosecutors about what resolution may be appropriate, given the evidence. In this case, given the importance of the matter, I think unusual transparency is in order.
Although there is evidence of potential violations of the statutes regarding the handling of classified information, our judgment is that no reasonable prosecutor would bring such a case. Prosecutors necessarily weigh a number of factors before bringing charges. There are obvious considerations, like the strength of the evidence, especially regarding intent. Responsible decisions also consider the context of a person’s actions, and how similar situations have been handled in the past.
In looking back at our investigations into mishandling or removal of classified information, we cannot find a case that would support bringing criminal charges on these facts. All the cases prosecuted involved some combination of: clearly intentional and willful mishandling of classified information; or vast quantities of materials exposed in such a way as to support an inference of intentional misconduct; or indications of disloyalty to the United States; or efforts to obstruct justice. We do not see those things here. . . .
As a result, although the Department of Justice makes final decisions on matters like this, we are expressing to Justice our view that no charges are appropriate in this case.
I know there will be intense public debate in the wake of this recommendation, as there was throughout this investigation. What I can assure the American people is that this investigation was done competently, honestly, and independently. No outside influence of any kind was brought to bear.
I know there were many opinions expressed by people who were not part of the investigation—including people in government—but none of that mattered to us. Opinions are irrelevant, and they were all uninformed by insight into our investigation, because we did the investigation the right way. Only facts matter, and the FBI found them here in an entirely apolitical and professional way. I couldn’t be prouder to be part of this organization.
Posted by Ted McLaughlin at 12:02 AM