Six Out Of Ten Americans Think Marijuana Should Be Legal 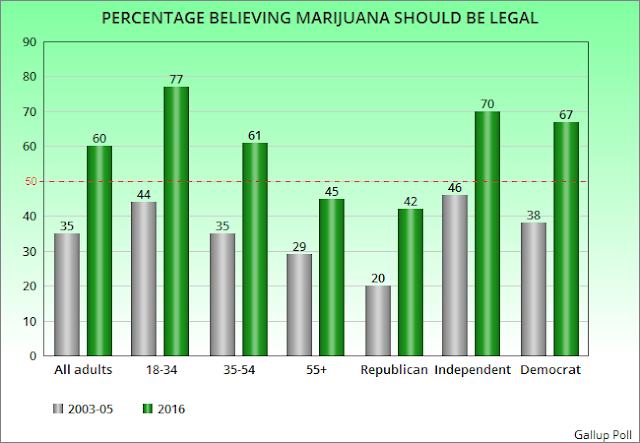 These charts are from a recent Gallup Poll -- done between October 5th and 9th of a random national sample of 1,017 adults, with a 4 point margin of error.

It shows the remarkably fast growth in the percentage of Americans who think the recreational possession and use of marijuana should be legal. In 1969, only 12% of the population wanted marijuana to be legal -- now the figure is 60%. Just in the last decade the percentage has nearly doubled -- from 35% to 60%.

I would expect that of Republicans, since they're good at spending lies and posing false "values". It is a little disappointing that the Baby Boomers aren't on board with legalization though. That's the generation that made marijuana popular.

It looks like the public is starting to shake off the government lies, and beginning to realize that marijuana is not the hardcore drug many want the public to believe (i.e., the liquor industry and those making money off pot being illegal).

Marijuana is not addictive, and a person cannot overdose on it. It can, however, provide a mild high, relieve tension, and has a host of other medical uses (with no side effects). It can also be a big source of new government revenues, and create many new jobs. It is time that marijuana was legalized throughout the nation.
Posted by Ted McLaughlin at 12:06 AM