Electoral College System Denies The Equality Of Each Vote

The top two charts (from the Cook Political Report and from CNN News) show the reality of the 2016 presidential election. As the top chart shows, Hillary Clinton got over 2.2 million more votes than Donald Trump did. But as the second chart shows, Donald Trump got more electoral college votes, and that means he will be our next president.

Many (including me) question the fairness of how the U.S. elects our presidents. They believe that the person who gets the most votes should win the election. Unfortunately, that is not true in this country. In the U.S., the president is chosen by which candidate wins the majority of states and their electoral votes. Winning the most votes nationwide is meaningless -- as shown by the reults of both the 2016 and 2000 elections (when Gore got more votes nationwide than Bush did).

The problem with that argument is that it is simply not true, as illustrated by the bottom chart. Under the electoral college system, votes in a large state are not worth near as much as votes in a small state -- giving voters in smaller states a much bigger voice in who gets elected. For instance, a vote in Montana is worth 362% more than a vote in California.

This is simply unfair -- especially in a country that prides itself on one man / one vote, with each vote being equal to all other votes. If we truly believed that all votes should be equal, then we must abolish the electoral college system. That is the only way to insure that voters in all states have an equal voice in choosing the president. 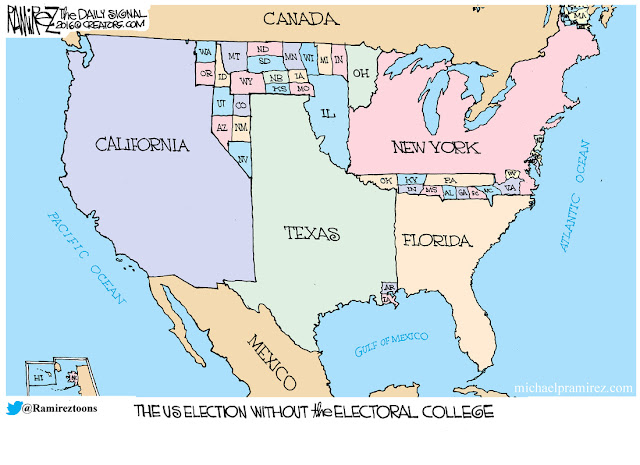