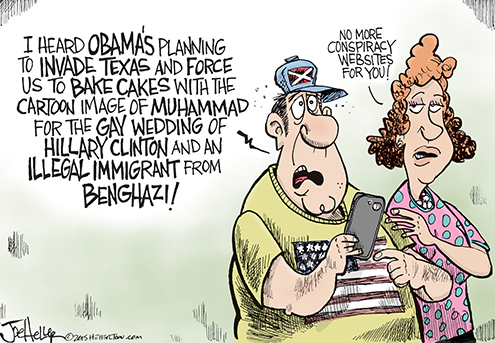 (Cartoon image is by Joe Heller at hellertoon.com.)

This survey should remove any doubts you may have had that the United States has millions of gullible idiots. It is the Economist / YouGov Poll -- done between December 17th and 20th of a random national sample of 1,376 adults, with a margin of error of 3.3 points.

Here are some common (and rather ridiculous) conspiracy theories, and the percentage of people believing they are true (or probably true).

Vaccines have been shown to cause autism.

The U.S. government helped plan the attacks of 9/11.

Saddam Hussein had weapons of mass destruction before the invasion of Iraq in 2003 that the U.S. never found.

The financial crash of 2008 was secretly orchestrated by a handful of Wall Street bankers.

President Obama was born in Kenya.

Leaked email from some of Hillary Clinton’s campaign staffers contained code words for pedophilia, human trafficking and satanic ritual abuse - what some people refer to as ’Pizzagate’.

Millions of illegal votes were cast in the election.

Russia tampered with vote tallies in order to get Donald Trump elected President.