Plutocracy Is Here - Trump Has Richest Cabinet In History 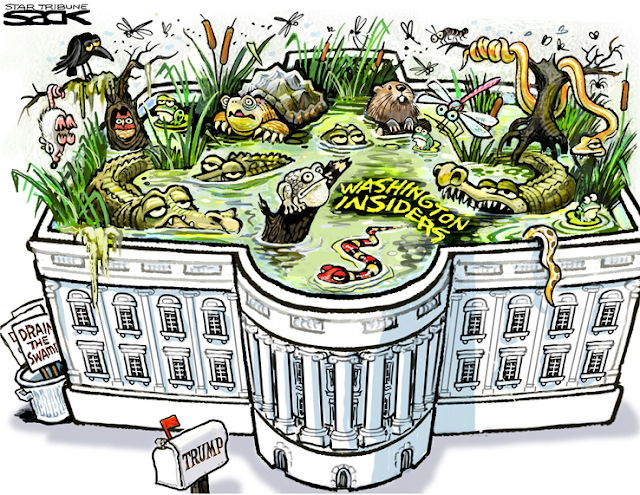 Many people (including me) have warned that we are losing our democracy. It is becoming a plutocracy (rule by the wealthy class). The current Congress has a median wealth of more than a million dollars, and a majority of members of Congress are millionaires -- and I expect the incoming Congress will not change that.

In addition, we will soon have our first billionaire president -- and he is filling his cabinet with billionaires and millionaires. He had promised to drain the Washington swamp, but he's just filling that swamp with bigger monsters -- rich people who lick their chops at the prospect of making themselves (and their peers) even richer at the expense of all other Americans.

The following article, written by Jim Tankersley and Ana Swanson for The Washington Post, discusses how Trump is in the process of appointing the richest presidential cabinet in the history of this country.


When George W. Bush assembled his first Cabinet in 2001, news reports dubbed them a team of millionaires, and government watchdogs questioned whether they were out of touch with most Americans’ problems. Combined, that group had an inflation-adjusted net worth of about $250 million — which is roughly one-tenth the wealth of Donald Trump’s nominee for commerce secretary alone.
Trump is putting together what will be the wealthiest administration in modern American history. His announced nominees for top positions include several multimillionaires, an heir to a family mega-fortune and two Forbes-certified billionaires, one of whose family is worth as much as industrial tycoon Andrew Mellon was when he served as treasury secretary nearly a century ago. Rumored candidates for other positions suggest Trump could add more ultra-rich appointees soon.
Many of the Trump appointees were born wealthy, attended elite schools and went on to amass even larger fortunes as adults. As a group, they have much more experience funding political candidates than they do running government agencies.
Their collective wealth in many ways defies Trump’s populist campaign promises. Their business ties, particularly to Wall Street, have drawn rebukes from Democrats. . . .
“It fits into Trump’s message that he’s trying to do business in an unusual way, by bringing in these outsiders,” said Nicole Hemmer, an assistant professor in presidential studies at the University of Virginia’s Miller Center. But Trump and his team, she added, won’t be able to draw on the same sort of life struggles that President Obama did, in crafting policy to lift poor and middle-class Americans.
“They’re just not going to have any access to that” life experience, she said. “I guess it will be a test — does empathy actually matter? If you’re able to echo back what people are telling you, is that enough?”
Trump’s nominee for commerce secretary is industrialist Wilbur Ross, who has amassed a fortune of $2.5 billion through decades at the helm of Rothschild’s bankruptcy practice and his own investment firm, according to Forbes.
Ross’ would-be deputy at the Commerce Department, Todd Ricketts, is the son of a billionaire and the co-owner of the Chicago Cubs. Steven Mnuchin, who Trump named to head the Treasury Department, is a former Goldman Sachs executive, hedge fund executive and Hollywood financier.
Betsy DeVos, a Michigan billionaire who was named as Trump’s education secretary, is the daughter-in-law of Richard DeVos, the co-founder of Amway. Her family has a net worth of $5.1 billion, according to Forbes. Elaine Chao, the choice for transportation secretary, is the daughter of a shipping magnate.
It is a group that has long spent big to influence politics. Mnuchin, Ross and DeVos each made hundreds of thousands of dollars of political contributions within the last two years, according to OpenSecrets.org. . . .
The question now is whether public officials who come from such privileged backgrounds will favor policies that benefit the rich.
“This isn’t a criticism or a conspiracy . . . but it’s important to recognize that everyone’s perspective and policy and government is shaped by the kind of life you’ve lived,” said Nicholas Carnes, a political scientist at Duke University. “The research really says that when you put a bunch of millionaires in charge, you can expect public policy that helps millionaires at the expense of everybody else.”
Future appointments could further increase the wealth of Trump’s cabinet. Harold Hamm — a self-made oil industry executive who ranks 30th on the Forbes 400, a list of the wealthiest Americans, with a net worth of $16.7 billion, — is on Trump’s shortlist for secretary of energy. Andrew Puzder, a restaurant industry executive, has been floated for labor secretary.
Posted by Ted McLaughlin at 12:02 AM