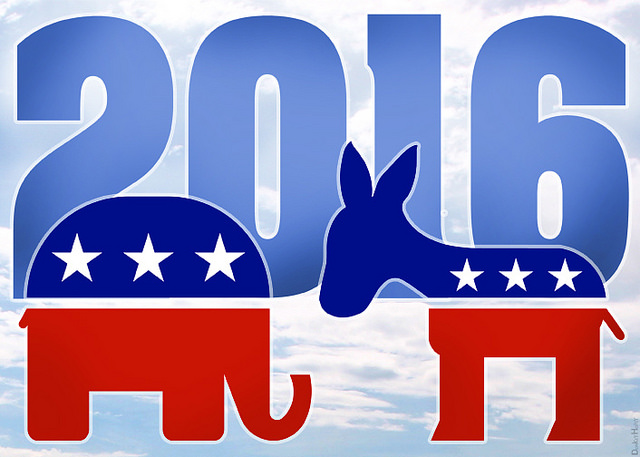 (This graphic image is by DonkeyHotey.)

From the Center for Public Integrity:


304: Number of Electoral College Votes won by Republican President-elect Donald Trump
2.8 million: Number of votes by which Democrat Hillary Clinton beat Trump in the national popular vote
$2.17 billion: Estimated amount spent by the presidential candidates and groups supporting them in the 2016 White House race
$242 million: Amount by which Clinton's campaign out-raised that of Trump
$66.1 million: Amount Trump contributed to his 2016 presidential campaign from his own personal funds
$600 million: Amount Trump, in 2011, said he would personally spend on a presidential campaign
$30 million: Amount the National Rifle Association spent on ads aiding Trump in the presidential race
$1 million: Price of top-tier sponsorship package for a "sporting, shooting, fishing and conservation" charity event that promised access to Trump and his adult sons immediately after Trump's inauguration
2: Number of days it took for Trump and his sons to disavow the event after widespread criticism
$20.4 million: Amount billionaire casino magnate Sheldon Adelson and his wife, Miriam Adelson, combined to give to pro-Trump super PACs and other groups backing Trump
$6.2 million: Amount former World Wrestling Entertainment executive Linda McMahon, who Trump picked to serve in his Cabinet as the Small Business Administration administrator, donated to pro-Trump political groups ahead of the election
33: Number of states that will be led by a Republican governor in 2017
3-to-1: Factor by which Team Clinton outgunned Team Trump on the TV airwaves during the general election
11: Percentage of TV ads sponsored by Team Clinton in Nevada during the general election that were in Spanish
Oct. 29: Date on which Clinton first aired general election campaign ads in Wisconsin, a state she ultimately lost to Trump by about 22,000 votes
$769,500: Top amount a single individual donor contributed to the Hillary Victory Fund, a committee that benefited Clinton’s campaign, the Democratic National Committee and a host of state Democratic party committees
$47,300: Amount "James Bond" actor Daniel Craig donated in 2015 to a purportedly pro-Bernie Sanders super PAC founded by a man who was arrested by the FBI in 2016 for securities fraud
$250,000: Minimum contribution amount to Trump’s inaugural committeeneeded to secure tickets to an “elegant,” “candlelight dinner” in Washington, D.C., at which Donald and Melania Trump, as well as Vice President-elect Mike Pence and Karen Pence, are slated to make special appearances
$3.3 million: Combined amount that oil giant Chevron, the 14th-largest publicly traded company in America, donated during the 2015-2016 election cycle to two super PACs focused on helping Republicans maintain control of Congress
$3.1 trillion: Estimated market capitalization of companies represented at tech company meeting in December with Trump
$2,403,082: Amount Google, Facebook and Amazon employees together gave to Clinton’s presidential campaign
$36,511: Amount they gave to Trump’s campaign
8,000: Approximate square footage of space Trump's organization rented during the late 1990s and early 2000s to an Iranian bank linked to terrorism financing
96: Percentage of campaign donations made by identifiable journalists that went to Clinton (versus Trump) through August
30: Number of days Clinton said it would take her, as president, to propose a constitutional amendment overturning the Citizens United v. Federal Election Commission decision
$450,000: Combined amount of money two pro-Clinton super PACs were forced to return because of questions about the legality of the contributions
49: Number of donors to a pro-Trump super PAC that had their credit card information erroneously published by the group in a federal document
$14.7 million: Estimated amount pot proponents spent on state ballot measure TV ads to boost legal marijuana
$60: Price of ceramic marijuana pipes made by a Bernie Sanders supporter in Oregon, which featured his campaign’s logo
6: Minimum number of current U.S. Supreme Court justices who are millionaires
1: Minimum number of Democratic U.S. Senate candidates to whom Trump campaign finance chairman and Treasury Secretary nominee Steven Mnuchin donated to this year
Posted by Ted McLaughlin at 12:04 AM

Email ThisBlogThis!Share to TwitterShare to FacebookShare to Pinterest
Labels: 2016 election