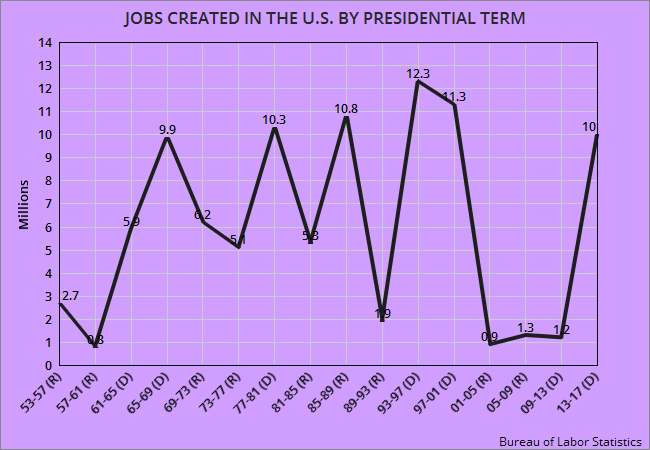 On the day before his inauguration, Donald Trump gave a speech to the New York Economic Club. In that speech, he promised that his economic policies would create 25 million new jobs over the next 10 years. That is not an outrageous figure. It would mean a job creation of 2.5 million jobs per year -- or about 10 million during his four-year term (20 million in an eight -year term). Other presidents have done that.

It won't happen though. Why? Because he clings to the failed Republican "trickle-down" economic policy. His plan to create jobs is to give corporations (and the rich) massive tax cuts, and to couple that with massive cuts to government spending (except for the military budget). That won't create a huge number of new jobs for several reasons.

1. Corporations are already sitting on trillions of dollars, and they are not spending that money to create new jobs. There is no reason to believe that giving them more money will change that.

2. The rich (and corporations) have recovered nicely from the Bush recession. They are making record profits, and have the money to buy anything they want. Giving them more money will not increase their spending (and if it did, there aren't enough of them to provide a real stimulus to the economy).

How can demand be increased? Only one way -- by increasing the amount of money the masses (the bulk of the population) have to spend. When the masses have more money to spend, it increases the demand for goods and services, and business will hire new workers to meet that demand.

The simplest way available to increase demand would be to raise the minimum wage to a livable wage (at least $10 an hour or more). Those making at or near minimum wage (nearly 25% of the work force) would have more money to spend, and they would spend it because they have to (since they are currently living in poverty). This new spending would boost the economy. It would also put an upward pressure on all wages, which would help the middle class workers to also make more money, and much of that new money would also be spent -- stimulating the economy and increasing demand even further.

Sadly though, that is very unlikely to happen. Trump (who has said wages are already too high) and congressional Republicans oppose raising the minimum wage. They cling to their failed policy of "trickle-down" -- the idea that giving more to the rich and corporations is good for everyone. That policy has failed, but they refuse to acknowledge it. They think that doing even more of it will somehow magically change the outcome. It won't.

And that is why Donald Trump will not create 25 million new jobs. With his policies, job growth will be anemic at best, and at worst, could result in a new and worse recession. American workers are in for some rough years.
Posted by Ted McLaughlin at 12:06 AM