The Fuse Has Been Lit On Trump's Russia Scandal 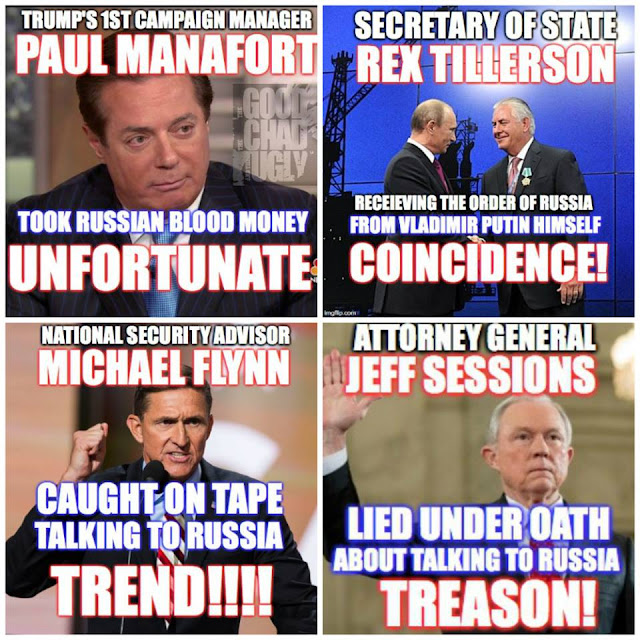 The following op-ed was written by Dan Rather:


Every once in a while in Washington, the fuse is lit for what seems to be a big scandal. Much more rarely does that fuse lead to an explosion of the magnitude we are seeing with Russia and the new Administration, and frankly the Republicans in Congress. How can anybody say, with all this billowing smoke and sights of actual flames, that there is no need to at least independently investigate whether a fire is burning down the very pillars of our democracy?
The pressure is obviously starting to mount as leading Republicans are now calling for Attorney General Jeff Sessions to recuse himself from the Russia investigation. This comes in the wake of serious and credible evidence reported by a vigilant press that the Attorney General, mind you the top law enforcement man in the United States, perjured himself in testimony to the Senate about meeting the Russian ambassador during the election. Sessions is but the latest person close to President Trump who seems to be ensnared in a story that is more worthy of Hollywood melodrama than the reality of the governance of our country. Democrats are calling for Sessions to resign, and this story could move very quickly.
We are well past the time for any political niceties or benefits of the doubt. We need an independent and thorough investigation of Russia's meddling in our democracy and its ties to the President and his allies. We don't know what we don't know. Perhaps there are perfectly innocuous reasons for why Mr Trump won't release his tax returns, why he has continued to speak admirably about President Putin and why his aides and advisors seem to be so close to Russia. That's why we need an investigation. If the air is to be cleared, it needs to be cleared. And if there is deep rot, it needs to be exposed. And quickly.
The press is doing an admirable job. But there is only so much it can do without such things as subpoena powers. Let's just make this clear. This is about a foreign and hostile power trying to influence our election while being in contact with close aides to the presidential campaign that the Kremlin wanted to win. Furthermore, there are serious questions about Mr Trump's longstanding ties to Russian money and influence peddlers. We don't know where this might go, but it isn't going away.

And it looks like the public agrees with Rather (see chart below). The public overwhelmingly wants to see an investigation of links between the Trump campaign and Russian officials by a whopping 49 point margin (72% to 23%). And that feeling goes across gender, age, racial, and party lines (with even 52% of Republicans wanting an investigation).

The chart was made from information in a recent Quinnipiac University Poll -- done between February 16th and 21st of a random national sample of 1,323 voters, with a margin of error of 2.7 points. 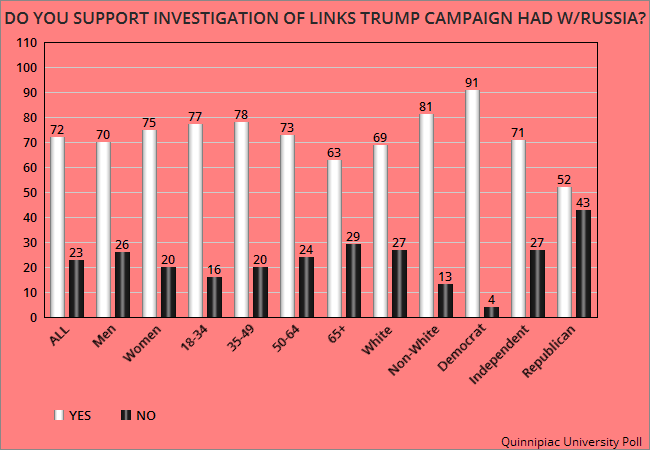