Bombing Of Syria Was Just A Trump Publicity Stunt 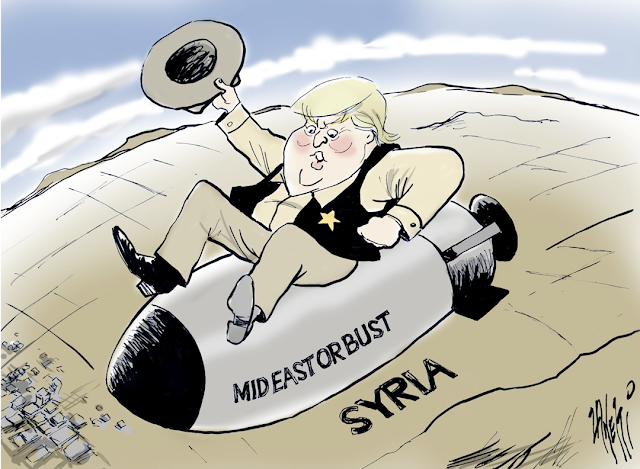 (Cartoon image is by Paul Zanetti at cagle.com.)

The Trump administration is trying to pass off its bombing of a Syrian air base as a humanitarian action to prevent Syria from gassing the rebels that oppose them. The more I think about the bombing, the more convinced I am that this is simply not true. The bombing was just a publicity stunt by the Trump administration.

Why do I say that? Consider how the bombing (by cruise missiles) was done. The Trump administration warned the Russians in advance of the bombing, knowing full well that Russia would warn its ally Syria. And that's exactly what happened. Both Russia and Syria used the warning to send both personnel and planes to a safe location. The only planes damaged in the bombing were six that were being repaired (and could not be removed).

The runway for the base was not bombed at all -- and according to observers, was back in operation the next day. How can you take an air base out of commission without bombing and destroying its runways? You can't. This tells me that Trump never intended to destroy the air base (or he would have targeted the runways with at least a few of the 59 missiles fired). It was all just an exercise in political theater (i.e., a publicity stunt). A few buildings were destroyed, but the base is still operational (and Syria has the same military capability it had before the bombing).

Why would Trump waste 59 cruise missiles on a publicity stunt? Because his job approval rating has been falling like a rock -- and currently rests in the mid-thirties (lower than any modern president in his first months in office) -- and that is unacceptable for a narcissist like Trump.

He could straighten out his chaotic White House, or alter his policies to more closely align with the wishes of the general population, but those would take time -- and he would have to admit that he's the architect of his own dismal approval ratings (something he seems incapable of doing).

The far easier way was to take military action against a supposed enemy (even though Syria has done nothing to endanger the United States). By sending Haley to the United Nations to claim the U.S. was acting out of a humanitarian concern, and then firing some missiles at Syria, Trump is able to pose as a warrior president -- a leader who worries about the Syrian people (the same people he is denying entry into the United States as refugees).

When presidents take military action, the country tends to unify behind them -- at least for a while. That was true when Bush I attacked Iraq, when Bush II attacked Afghanistan, and when Obama sent Navy Seals to take out Osama bin Laden. Trump is hoping that his publicity stunt will have the same effect, and that he can get his job approval up (without doing anything to justify it).

None of this should surprise us. Trump has always been more about show than substance (or as we say in Texas -- all hat and no cattle). Trump is a poser, and now he's posing as a military leader. I hope most Americans are smart enough to see through it.
Posted by Ted McLaughlin at 12:08 AM