The Damage Trump Has Done To Workers In 100 Days 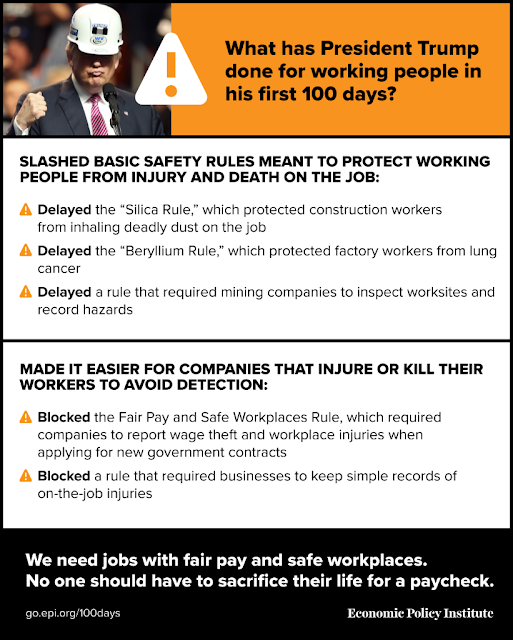 Celine McNicholas, Heidi Shierholz, Josh Bivins, and Daniel Costa have written an excellent article for the Economic Policy Institute about the damages to workers' rights and safety that Trump has done in his first 100 days. It's a lengthy article, but well worth reading. Here is their conclusion:


In his first 100 days in office, President Trump has continued to talk about creating “jobs where Americans prosper and grow.” However, his actions during that time tell a different story. He has already instituted policies that make workers less safe in the workplace and threaten their ability to access earned benefits like unemployment insurance. Trump has used his time in office to support legislation that would have stripped health care coverage from millions of Americans—many of them workers. His first choice for labor secretary was CEO of a company with an established record of violating basic labor and employment laws. Trump’s second nominee to that post failed to answer important questions at his confirmation hearing and expressed an openness to undermining long-established labor standards that protect workers’ time and earnings.
This nation’s workers deserve more than talk. They continue to struggle with rising economic inequality and slow wage growth. President Trump has done nothing in his first 100 days to address these issues. In fact, his agenda of deregulation of worker protections clearly undercuts workers and a fair economy. If Trump were serious about improving the lives of working men and women, he would advance policies that boost workers’ wages and quality of life instead of using rhetoric to divide working people. Trump would assemble advisers with experience advocating for workers instead of selecting Wall Street financiers and corporate owners who for decades have used government policy to shift economic leverage and bargaining power away from low- and middle-wage workers, eviscerating labor laws and devaluing the minimum wage. He would advance judicial nominees who would serve as neutral arbiters of the law instead of selecting a Supreme Court justice with a record of hostility to worker safety. If Trump wanted to help working men and women “prosper and grow,” he would have acted very differently during his first 100 days.
Posted by Ted McLaughlin at 12:02 AM