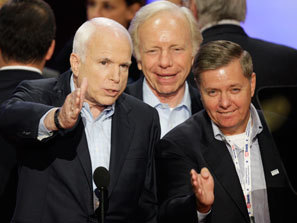 (This photo, from Politico, is of Joe Lieberman appearing at the 2008 Republican National Convention with Republicans John McCain and Lindsey Graham.)

Donald Trump showed a serious lack of judgement in firing James Comes as FBI Director. While he just did it to impede the FBI's investigation into his administration regarding ties to Russia (which he as much as admitted both to NBC's Lester Holt and to the Russian foreign minister and ambassador), he actually thought Democrats would see it as a bipartisan reaching out to them.

He was shocked when both congressional Democrats and rank-and-file Democrats across the nation blasted the Comey firing. Democrats, while they were not happy with Comey, knew he wasn't fired because of that. They understood it was just an effort by Trump to impede the investigation of him and his aides -- and they didn't like it a bit. It showed that Trump has a fundamental lack of political judgement, and that calls into question his competence to serve as president.

Now he seems poised to repeat that same lack of judgement. He will soon pick Comey's replacement as FBI Director. And the strong rumor from White House sources is that the pick will be former senator Joe Lieberman.

Once again, he seems to think this would be a choice that would please Democrats (since Lieberman was elected to the Senate as a Democrat), and be viewed as a bipartisan choice. He is WRONG!

Joe Lieberman is not respected within the Democratic Party. In fact, he is almost universally despised by most Democrats. They remember that as a senator he could not be depended upon to vote to uphold Democratic Party ideals and beliefs. And they remember him as a turncoat, who appeared at the 2008 Republican National Convention to support John McCain -- showing a lack of respect for the Democratic nominee, Barack Obama.

What would Democrats really want? They want the new FBI Director to be a career law enforcement person, who has not shown a preference for either political party. Democrats would view that kind of pick as bipartisan. They don't want any politician (of either party) chosen.

If Trump chooses Lieberman, it will be another serious lapse of judgement -- and it will further call into question his competence to be president.
Posted by Ted McLaughlin at 12:08 AM