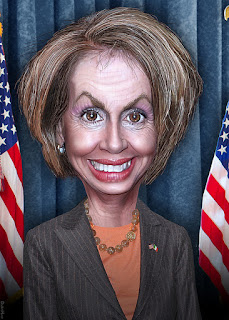 (This caricature of House Minority Leader Nancy Pelosi is by DonkeyHotey.)

During the Georgia special election, Republicans ran an ad saying the Democratic candidate supported the liberal Nancy Pelosi and her California friends. It was a silly ad that Republicans loved, Democrats hated, and Independents ignored (because they were voting for a House member from Georgia -- not Pelosi).

But some Democrats are now trying to say that the Georgia special election was lost because Pelosi is the House Minority Leader -- and as long as she remains in that position, Democrats will continue to lose elections.

It's hogwash! Georgia's 6th congressional district is a very red district, and Democrats never really had a good chance to win that district. Those in that district were going to elect a Republican to represent them (no matter how bad that Republican was or how good the Democratic opponent was -- or whoever was the House Minority Leader). If you want to blame Pelosi for that loss, then you also must give her credit for the Democrats doing better there than in the last four decades. But neither is true. A safe Republican district elected another Republican, and that's all that happened.

If Pelosi was to be replaced as Minority Leader, how long would it take for the Republicans to start demonizing her replacement (no matter who that replacement was)? Probably less than 24 hours. That's just what Republicans do. They try to demonize their opponents and other Democrats (especially Democratic leaders). Are we going to replace every Democratic leader that is demonized by the right-wing Republicans? If so, then we would be continually replacing our leaders, and our leadership would look like a revolving door.

Democrats need to stop attacking our own party leaders. When we do so, we are just playing into the Republican's hands, and doing their job for them. Nancy Pelosi is an honest, experienced, and competent legislator and party leader -- and we should be grateful to have her leadership. She is also a good progressive, but a realistic one. She knows what can be accomplished and what can't -- and she gets done what she can right now, while never giving up on what else can be accomplished in the future. That's not a bad thing -- but good politics.

Most of the attacks on Pelosi (just like the Democrats attacking Hillary Clinton) are coming from party extremists on the left. They want to replace Pelosi (and other party leaders) with people who will move the party far to the left. While I wouldn't mind seeing this whole country move toward leftist politics, I think moving the Democratic Party to an extreme leftist party will just ensure defeat after defeat -- because most American voters, like it or not, are moderates. They want change, but they want that change to be done in moderate steps.

If you, as a Democrat, feel the need to vilify any politician, then direct that at Republican politicians. They have earned it -- Pelosi hasn't. 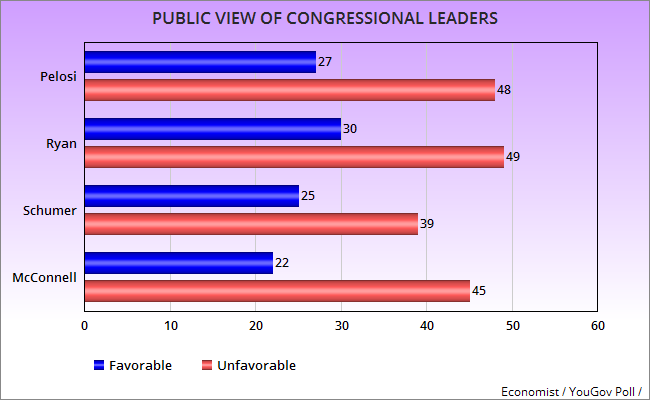 Chart is made from information in a new Economist / YouGov Poll -- done between June 18th and 20th of a random national sample of 1,500 adults (including 1,277 registered voters), with a 3 point margin of error.
Posted by Ted McLaughlin at 12:06 AM