In No State Can Min. Wage Worker Afford A 2-Bedroom Apt. Shouldn't any person willing to work hard at a full-time job make a livable wage? Most Americans would say yes, but that is just not the case for millions of American workers. Those are the workers that are making at or near the federal minimum wage.

That wage is currently $7.25 an hour ($15,080 a year). But as the chart above shows, that wage would not let any minimum wage worker afford a decent 2-bedroom apartment (and have money left for other necessities) in any of the 50 states. The closest would be Arkansas, where a worker would need to make about $13.72 an hour to afford a decent 2-bedroom apartment. But that would still leave a minimum wage worker about $6.47 an hour short.

Here in Texas -- the state with the largest number of and largest percentage of minimum wage workers -- it would take $18.38 an hour. That means a couple, both working full-time for minimum wage, would still be short by $3.88 an hour. With both working, they would still have to sacrifice other necessities to rent a 2-bedroom apartment. That's inexcusable.

Republicans will also tell you that businesses couldn't afford to pay a higher wage. That's another lie. Viable businesses would actually see their sales and profits rise if minimum wage workers made a livable wage. Those workers (unlike the rich the Republicans want to give more to) would spend the extra money, boosting the economy.

Boosting the minimum wage to a livable wage would have another desirable effect. Currently, businesses are foisting part of the wage they should be paying onto the American taxpayer (because the workers need government help to live). Paying a livable wage would remove millions of workers from government rolls (welfare, food stamps, etc), and that would save taxpayers money because those programs could then be cut without hurting people who need them.

In other words,  raising the minimum wage to a livable wage would benefit everyone -- workers, businesses, and taxpayers.

Unfortunately, raising the minimum wage will never happen under Republican leadership. Trump believes the wage is too high, and many Republicans in Congress would like to do away with the minimum wage (and allow employers to pay even less than $7.25 an hour). 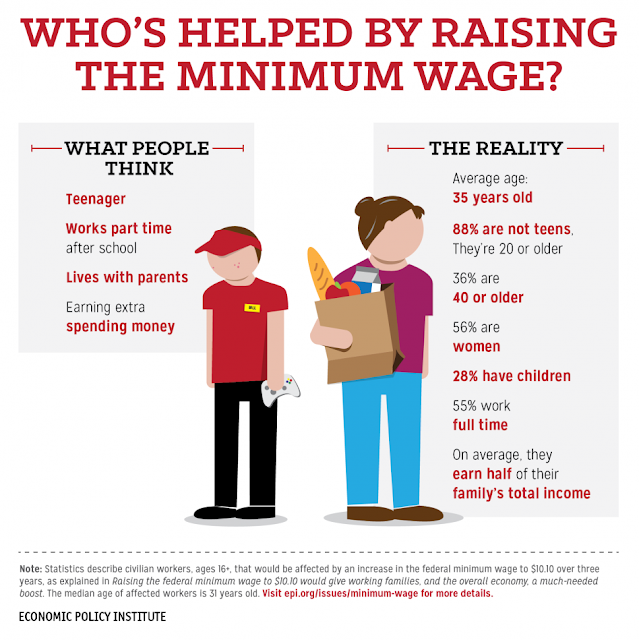