Remembering The Tragedy In Orlando 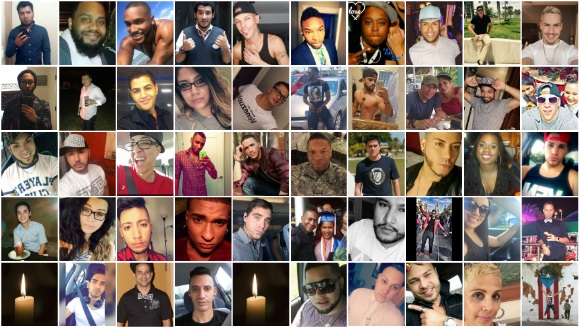 (This collage of the victims of the Orlando nightclub shooting is from WPRI.com.)

It's been one year today since the Orlando shooting at the Pulse nightclub that killed 49 people and wounded 58 others -- the deadliest mass shooting by a single person, and the deadliest terrorist attack since September 11, 2001 in the United States. As we remember this tragedy, there are a few facts we should not forget.

* This terrible tragedy would not have been prevented by Trump's bigoted travel ban. The shooter was born in the United States, and his parents did not come from one of the countries on that travel ban.

* This was not just a terrorist act, but also a hate crime -- leveled against the LGBT community.

* Even though gays and lesbians can now marry the person they love (thanks to the Supreme Court), they are still discriminated against in myriad other ways (housing, employment, etc.).

* Nothing has been done in the last year to close the loopholes in the background check program for gun buyers (even though 80% to 90% of Americans want those loopholes closed). Terrorists, homophobes, misogynists, racists, and other criminals can still buy any kind of firearm they want (including assault weapons) without having their background checked -- and 40% of the guns sold in this country each year are sold without a background check being done.
Posted by Ted McLaughlin at 12:06 AM