YES! The Virginia Shooter Is A Terrorist! 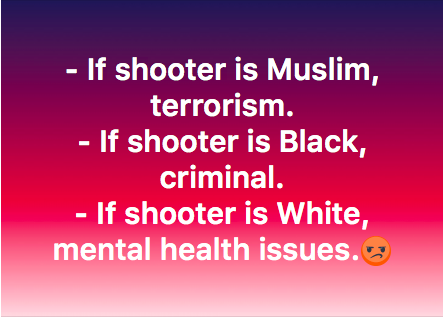 There's a lot of truth in the graphic above. if a muslim had done the shooting in Virginia (in which Republicans had been targeted), everyone would be talking about it as an act of terrorism. And if it had been done by a Black man, we would now be hearing about the criminal behavior of the Black community. But it was an older white male, so we are hearing neither of the above from our leaders.

Instead, we are hearing about how the shooter must have had mental health issues. Well, DUH! A case could be made that everyone that targets unarmed people with violence has mental health issues, but that's beside the point. It's time that we stop the racist (and religiously bigoted) idea of how we term those who kill unarmed people in our society.

"The unlawful use of force and violence against persons or property to intimidate or coerce a government, the civilian population, or any segment thereof, in furtherance of political or social objectives."

The Virginia shooter (I refuse to use his name) may have been an older white male, but he is a TERRORIST -- and it's time for us to be honest about that. It doesn't matter whether he was American or Middle Eastern (or any other ethnicity), christian or muslim (or atheist), was male or female, or subscribed to a left-wing or right-wing political view -- he committed a terrorist act.

Whites in the United States, especially those on the right, go out of their way to avoid using the word "terrorist" to describe other Whites or christians. That is racist, bigoted, and disingenuous -- and it needs to stop.

A bit of honesty would be a breath of fresh air -- and it could go a long way toward finally recognizing and solving the home-grown terrorism problem we have in this country (a problem that is far more dangerous to the American public than terrorism by foreigners). 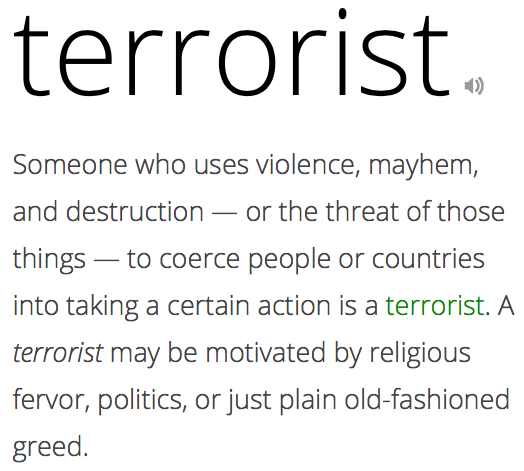