Is The Media Being "Played" By Trump's Tweet Storm ? 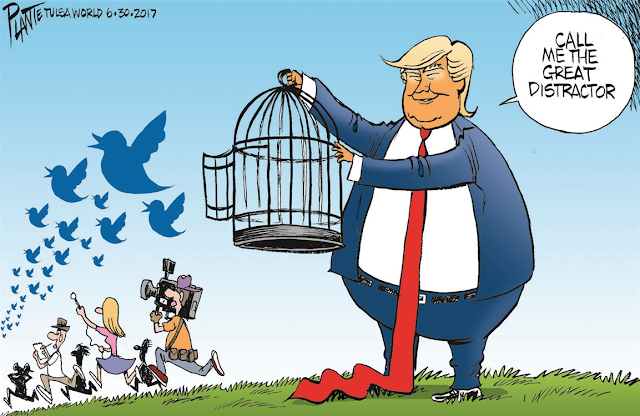 (Cartoon image is by Bruce Plante in Tulsa World.)

It seems like much of what the mainstream media is reporting on these days is the tweets being done by Donald Trump -- and the time spent on the tweets is time taken away from more important issues which affect the entire population. Is Trump doing this intentionally -- to take attention away from the failings of his administration (and the GOP Congress)? Is the whole "war on the media" just a bone thrown to his cult following to distract them from realizing he has not made good on any of his campaign promises? Probably.

Here is most of an article by Kyle Pope for the Columbia Journalism Review. It takes the media to task for their tweet coverage, and says they must change how they are covering Trump. Pope writes:


The question isn’t whether Trump’s tweets are newsworthy, because they are, as a smudgy window into the man’s psyche. But, in most cases, they simply don’t deserve the weight and emphasis the press gives them. Yes, Trump’s tweet of a crude video casting him as a pro wrestler pummeling CNN was outrageous. It deserved notice for what it tells us about Trump’s juvenile mind and the dark alleys of the internet that he and his staff tend to frequent. But the airtime given the video, especially on CNN, was wildly disproportionate given everything else going on in the world. (And that was before the network’s reporters seemed to threaten the video’s creator with unmasking if he dared go after the network again.)
Our response to each of Trump’s media-bashing episodes comes off as if we’re hearing them for the first time. Can you believe he said that? Could this be the thing that finally does him in? Does he have no respect for the First Amendment?
The answer, of course, is that he doesn’t respect the Constitution’s guarantee of free speech. The media’s impulse, which is understandable, is to keep the focus on his threats to the press, and not to let them become normalized. But we have reached the point at which the media response has become counterproductive and even beneficial to the president and his lackeys in the White House, who have turned the West Wing into a megaphone for Trump’s faux media war and reporters in the White House briefing room into photo-op foils. It’s amazing, and absurd, that we turn over live television to the press secretary to air the administration’s latest broadside against the press, and let senior administration officials go off the record to attack our own outlets.
What we’re missing–as I pointed out in an open letter to Trump on the eve of his inauguration–is that we aren’t obligated to cede the media agenda to this or any other administration. We control the airtime, we decide who gets quoted and how, we set the rules of engagement. The daily White House press briefings outlived their usefulness months ago. Now it’s time to reassess how we cover Trump and ourselves.
The president is fully aware that his war against the press is one of the few things that is working for him. His campaign promise to replace Obamacare is in tatters, his immigration ban has been watered down by the courts, the wall is still only (and thankfully) an architect’s rendering. There’s very little of substance left to bind Trump to his base or to the rightwing mediasphere that has been his cheerleader. Take away the war on the media and the bond between Trump and his supporters thins out fast. (It says something that the CNN video was Trump’s most-viewed tweet since Election Day. As the country headed into the July 4 holiday, many of the most-viewed stories on Breitbart.com–Trump’s id, in headline form–were about the media.)
What would happen if, instead of screaming every time Trump hit “Tweet,” we let some of the most inane messages die? What if we took a breath and thought through what they mean? The fact that Trump doesn’t like Morning Joe is something we’ve known for months. What’s important about his recent tweets about the show, which were awful, isn’t that he called out a cable-news host or thinks MSNBC has been inaccurate. What is important is that he’s a serial liar, obsessed with his media mentions to the point of hysteria, and continues to judge women largely by their appearance. To cover the Morning Joe tweets as yet another story about Trump’s war with the media in a way reduces it; it’s about something bigger than us. That notion is in the subtext of much of the media reporting on Trump, but too often it’s overshadowed by the focus on the broader media war.
Pulling back from our own self-reflection and focusing all of that attention where it properly belongs–on our childlike, possibly unstable national leader and the wrenching national policy changes he is stumbling to put into place–could, ironically, also be the thing that convinces the rest of the country to pay attention to the dangers inherent in Trump’s attacks on the media and the First Amendment.
Every time Trump fires a shot in his war against the media, there’s an opportunity for a more serious, nuanced argument about why everyone benefits from a free and vigorous press: Airing a president and his policies to open discussion and scrutiny results in better government. Squashing those things, or seeking to discredit the scrutiny before it even happens, neutralizes a key check against power baked into our Constitution. Dialing up the outrage meter every time Trump attacks CNN, The Washington Post, or The New York Times gets us no closer to that important debate, which is just fine for a president who has very little else to offer.
For that fuller portrait to emerge, we, the press, need to get the hell out of the picture.
Posted by Ted McLaughlin at 12:02 AM