Trump's Attacks On The Media Endangers Our Democracy 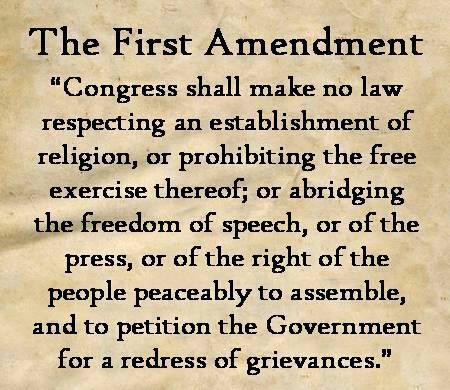 (Image of the First Amendment is from the website of Michael Owens.)

Our Founding Fathers understood the value of a free and independent press. They thought it was necessary to the continuation of our representative democracy -- so necessary that it was prominently placed in the First Amendment of our Constitution.

And to our good fortune, our modern presidents have understood this. They may have disagreed with some things the press reported, but they never attacked the press as an institution, or made personal attacks and threats against individual journalists.

Donald Trump is different. He started his attacks on the press during his campaign, and those attacks have only increased since he took office -- both against the media in general and against individual journalists. Trump has sought to destroy the reputation of the press in the eyes of the American people, calling their stories about him "fake news" -- and sadly, too many in his cult of personality are accepting that as truth.

Trump doesn't understand that if the public's faith in the independence and fairness of the press is undermined then our democracy is also undermined. How can a democracy survive if the people don't know what their government is doing (or how government actions will affect them)?

I am left to wonder if Trump even cares about the survival of our democracy. Does his narcissistic personality demand a cowered press? Does he want the ability of a king or dictator to do whatever he wants -- without a free press to report it? That's what it looks like. It seems that he is more concerned with his own narcissistic needs than he is with preserving and defending our democratic way of life.

Trump's attacks on the media are not amusing or inconsequential. They are dangerous -- and they should be treated that way. The survival of our democracy demands it.
Posted by Ted McLaughlin at 12:06 AM