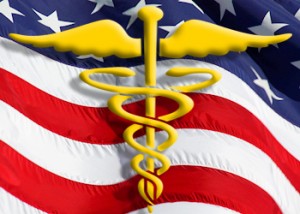 (This image is from the website All U Need.)

Most developed nations provide all their citizens with decent health care. They consider health care to be a right (instead of just a product sold to those who can afford it). They have chosen different ways to do this. Some have nationalized health care (with doctors and hospitals working for the government, some have opted for a single-payer health insurance system, and some do it through a mixture of government and private insurance -- but all of them have something in common. They all provide universal health care coverage (coverage for all citizens).

There is one nation that does not provide universal health care coverage -- the United States. The Democrats passed the Affordable Care Act in 2010. The ACA (commonly known as Obamacare) covered many millions more Americans with health insurance -- lowering the uninsured rate fro about 18% to under 10%. But it still left 28 million Americans with any health insurance. That was partly due to state GOP administrations refusing to expand Medicaid, and partly due to the fact the ACA simply wasn't designed to cover everyone.

The Republicans have promised to repeal the ACA and replace it with something better for the last seven years. Unfortunately, every plan they came up with would increase the number of uninsured Americans from 28 million to more than 50 million. Thankfully, none of those plans made it through Congress.

There is now a group of Republicans and Democrats in Congress working to "fix" the problems with the ACA. But they are just talking about fixing insurance availability and costs for a few million people who buy their own policies. They are NOT discussing any ways to cover the 28 million uninsured Americans with any kind of health insurance.

The sad fact is that neither of our political parties is ready to address America's greatest shame -- the fact that 28 million Americans have no real access to our health care system. There are those who claim the country cannot afford to provide decent health care to all its citizens. That is simply a lie -- for the following two reasons:

1. The United States is still the richest nation on the planet -- richer than any of the other developed nations (who all provide health care for all their citizens).

2. The United States currently spend far more for health care per capita than any of the other developed nations, and we get less for those dollars spent than other nations get.

It is simply shameful that so many millions of Americans have no health insurance, which means they have no access to life-saving preventative care. And neither party is addressing the issue. Until they do, they are failing the nation they claim to represent -- and that is inexcusable.
Posted by Ted McLaughlin at 12:06 AM