Drain The Swamp? No - Trump Added Voracious Critters To It 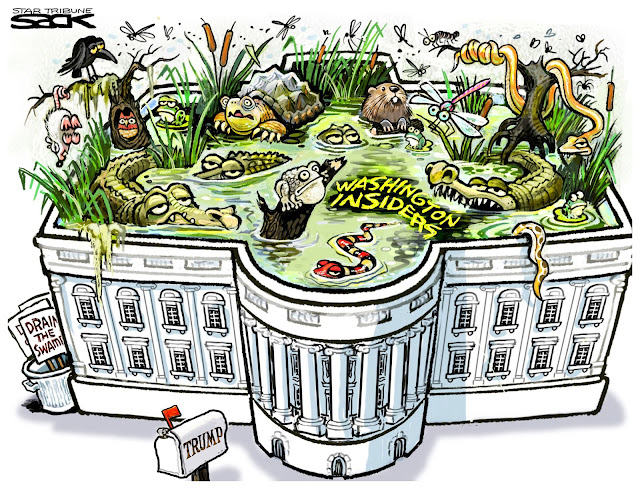 During his presidential campaign, Donald Trump promised the public that he would "drain the swamp" in Washington -- making the government more responsive to ordinary Americans.

What he has actually done is put foxes in charge of all the government henhouses -- giving lobbyists and corporate bigwigs even more opportunity to feather their own nests at taxpayer expense. His administration now has the potential to be the most corrupt in our nation's history.

Consider the following from Lachlan Markay and Sam Stein at The Daily Beast:


Nearly a year since he won election, the president has turned federal agencies over to the private industries that they regulate. And he has done so to a degree that ethics groups say they have never witnessed.
The Daily Beast examined 341 nominations the president has made to Senate-confirmed administration positions. Of those, more than half (179) have some notable conflict of interest, according to a comprehensive review of public records. One hundred and five nominees worked in the industries that they were being tasked with regulating; 63 lobbied for, were lawyers for, or otherwise represented industry members that they were being tasked with regulating; and 11 received payments or campaign donations from members of the industry that they were being tasked with regulating.
Posted by Ted McLaughlin at 12:02 AM