The 11 Steps To A Healthier (And Fairer) U.S. Economy 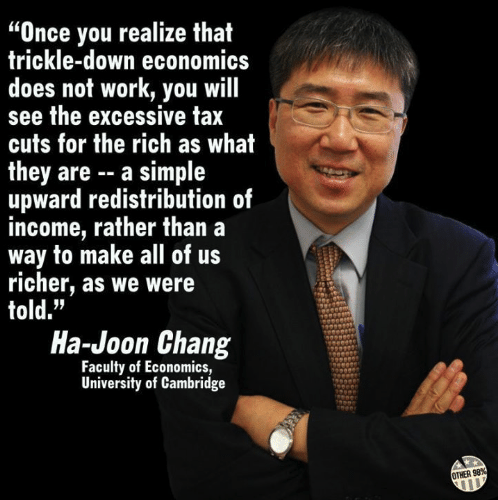 A little over three decades ago, the American people were conned by congressional Republicans and right-wing economists. They were told that "trickle-down" (supply-side) economics would benefit all Americans. This is the idea that giving more to the rich and corporations (through tax cuts and deregulation) would benefit everyone, because that extra money given to the rich would trickle down to everyone else in the form of new jobs and higher wages.

That policy was a massive failure. The rich got much richer and the corporations made much larger profits, but nothing trickled down. Workers saw their wages stagnate, and their buying power actually fall as inflation ate away at those stagnate wages This trickle-down policy is slowly turning the U.S. into a country of "haves" and "have-nots" as it destroys the once vibrant middle class.

Now Trump, and his congressional Republican cohorts, want to double-down on this failed economic policy. They claim they want to give the middle class a tax cut. Unfortunately, it's just another huge lie. Their tax cut plan would actually benefit the rich and the corporations, while giving some in the middle class a small cut and actually raising taxes on others. It's just more trickle-down nonsense.

It doesn't have to be this way. There are ways to improve the economy for everyone (if the Republicans could be voted out of power). Here are the 11 steps, from the Economic Policy Institute, that could (and should) be taken to fix the economy -- making it healthier and fairer.

In 2015, the inflation-adjusted minimum wage is about 25 percent below what it was in 1968—even though productivity has doubled and the education and skills of those in the bottom fifth have greatly improved. Moving the minimum wage to $12 by 2020 would benefit about a third of the workforce directly and indirectly.

The share of salaried workers eligible for overtime has fallen from 65 percent in 1975 to just 11 percent today. This is largely because only those earning less than $23,660 (a poverty-level wage) are covered by the Fair Labor Standards Act regardless of their workplace duties. Fortunately, President Obama has instructed the Department of Labor to revise this salary threshold. If we move the threshold to the value it held in 1975—roughly $51,000 today—we would provide overtime protections to 6.1 million more workers. This would provide them with higher pay and/or more leisure time, while providing incentives for companies to hire more workers.

The single largest factor suppressing wage growth for middle-wage workers over the last few decades has been the erosion of collective bargaining, which has affected both union and nonunion workers alike. Making it easier for willing workers to form unions, increasing penalties for corporate violations of labor laws, and halting and reversing the spread of so-called right-to-work laws will help give workers the leverage they need to bargain for better wages and benefits and set high labor standards for all workers.

Undocumented workers are vulnerable to exploitation by unscrupulous employers. Consequently, they earn lower wages than workers who have greater access to legal protections and are able to switch jobs more readily. President Obama’s executive actions to provide work authorization to undocumented workers, and comprehensive immigration reform that in addition provides them a path to citizenship, are polices that will provide these workers with basic workplace protections and enable them to earn higher wages. Regularizing undocumented workers will not only lift their wages, but will also lift wages of U.S. workers in the same fields of work.

The United States has failed to adopt new labor standards that respond to emerging needs. In particular, we need updated standards to assist workers and their families in achieving a better balance between work and family. Providing earned sick leave and paid family leave would help to raise workers’ pay—and would give them more economic security.

End discriminatory practices that contribute to race and gender inequalities

Generating broader-based wage growth must also include efforts to close race and gender inequities that have been ever-present in our labor market. We need consistently strong enforcement of antidiscrimination laws in the hiring, promotion, and pay of women and minority workers. This includes greater transparency in the ways these decisions are made and ensuring that the processes available for workers to pursue any violation of their rights are effective.

The enforcement of labor standards in the United States is so weak that hundreds of thousands of employers routinely fail to pay minimum wage or overtime, fail to protect employees from workplace hazards, fail to pay payroll taxes or worker’s compensation premiums, or fail to provide family and medical leave. Wage theft alone costs employees tens of billions of dollars a year, and lack of worker’s compensation coverage, unemployment insurance coverage, or Social Security coverage can cost them billions more. More enforcement and tougher penalties are needed to deter these violations, and access to the courts must be available to injured workers. Employers’ growing use of forced arbitration—where employees, as a condition of employment, give up their right to sue in the public courts and are shunted into secret, private proceedings that can both be more costly and provide poorer remedies—must be stopped and reversed. As government enforcement resources decline, it is vital that workers have effective remedies in state and federal courts for labor standards violations.

Federal Reserve Board policymakers are now considering when and how much to raise interest rates. In essence, a decision to raise interest rates is a decision to slow the economy and weaken job and wage growth. Given that wages have stagnated and that many communities have yet to adequately benefit from the recovery, it is imperative that monetary policymakers keep their foot off the brakes and allow the recovery to proceed as quickly as possible. Policymakers should not seek to slow the economy until growth of nominal wages (wages unadjusted for inflation) is running comfortably above 3.5 percent (which is consistent with ongoing productivity growth of 1.5 percent and a target inflation rate of 2 percent).

To obtain full employment for all, we need policies that can direct jobs to particular areas that suffer from high unemployment even when the national labor market is largely healthy. These policies can include public and nonprofit employment programs that create jobs by meeting unmet needs. Additionally, undertaking a sustained (for at least a decade) program of public investment can create jobs, raise our productivity, and spur economic growth.

Many of our major trading partners engage in intentional currency manipulation—buying up dollar-denominated assets on global financial markets simply to depress the value of their own currency. This depressed currency value makes imports cheaper in the U.S. market and U.S. exports more expensive. This results in a larger trade deficit and slower job growth. Eliminating currency manipulation could reduce the U.S. global trade deficit by between $200 billion and $500 billion each year, which could increase overall U.S. GDP by between $288 billion and $720 billion and create between 2.3 million and 5.8 million U.S. jobs. Congress and the president should reject any trade treaties that do not have enforceable provisions to combat currency manipulation.

Use the tax code to restrain top 1 percent incomes

Tax preferences for executive pay can be eliminated or their use tied to the executive’s firm giving wage increases equal to productivity growth. Others have recommended tying corporate tax rates to the ratio of executive pay to median worker pay, as well as changes to corporate governance procedures. Additionally, imposing a financial transactions tax can steer investments toward productive uses and away from speculation, and restrain unproductive financial activity and pay. Finally, higher top marginal tax rates can reduce the incentive for financial-sector professionals and corporate managers to rig markets or suppress wage growth to make more income flow their way.
Posted by Ted McLaughlin at 12:02 AM