Trump Had Nothing New To Offer About Opioid Problem 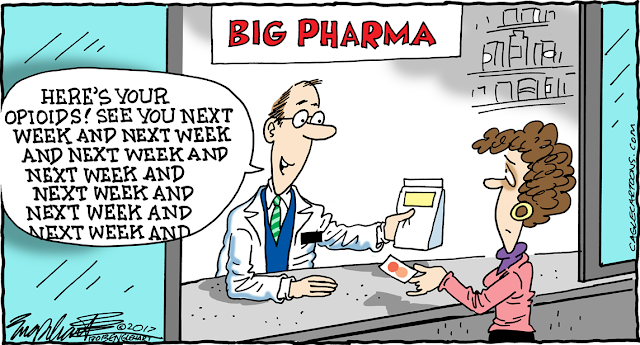 (Cartoon image is by Bob Englehart at cagle.com.)

I wasted an hour the other day by listening to Donald Trump's "huge" speech on the opioid epidemic in this country (which is taking an average of 142 lives each day -- mostly overdoses). I say wasted, because listening to him I realized he had no knew ideas about how to solve the problem.

What I heard was just a rehashing of old solutions that have proven to be failures. He said he would interdict the drugs. Does that mean he will throw money money at the failed "war on drugs"? We have been trying to treat drug use in the is country as a legal problem for decades, and accomplished nothing except to fill our prisons with non-violent people (while drugs are as available as ever).

He also said he would convince Americans not to use drugs. Really? Wasn't that tried by Nancy Reagan while her husband was president? And if it didn't work for an administration as popular as Reagan's, why should we believe it would work for one as unpopular as Trump's?

Finally, he said he would keep the opioids out by building a wall. That just shows he doesn't understand the problem at all. While heroin does enter this country from other places, most don't cross our southern border with those looking for work and a better life. It comes by plane, ship, truck, mail, etc., and won't be stopped by a wall. Also, it's not foreign heroin that has ballooned the opioid problem. It is the opioid pills made and sold by American pharmaceutical companies that is flooding the market and causing the increase in opioid deaths.

All the speech showed was that Trump doesn't understand the problem and has no solutions. The speech was just another opportunity for him to preen and brag about what a wonderful leader he is -- and most Americans don't believe that. It would have been nice if Trump had offered some solutions, but he didn't.
Posted by Ted McLaughlin at 12:06 AM