Trump Is Still LYING About Who Benefits From GOP Tax Cut 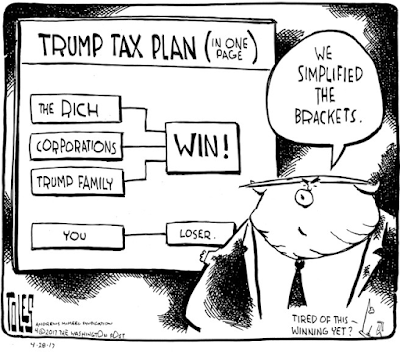 (Cartoon image is by Tom Tales in The Washington Post.)

Donald Trump continues to lie to the American people about the Trump/GOP tax cut plan. He says the biggest benefits go to the middle class, and that he (and other rich people) will not benefit at all -- but will be hurt by the tax plan. That is not within miles of the truth. In fact, it is a big fat LIE!

Here is NBC News calling him out on his lies about the tax plan:


President Donald Trump made another sales pitch for his tax plan in Missouri on Wednesday, repeating his erroneous claim that the Republican bill, if passed, would cost him and other rich Americans “a fortune.”
“This is going to cost me a fortune, this thing, believe me," Trump told an enthusiastic crowd in St. Charles, just outside St. Louis. "This is not good for me."
He added that his “very wealthy friends” were “not so happy with me” when it came to the bill, but he pressed Senate Republicans to pass it this week anyway.
In fact, Trump and his family could save more than $1 billion under the House tax plan that passed two weeks ago, according to an NBC News analysis.
And under the Senate plan, the wealthiest Americans, like Trump, would get nearly 62 percent of all of its benefits by 2027, while two-thirds of middle-class Americans would face a tax increase, according to the Tax Policy Center, a nonpartisan think tank in Washington.
Meanwhile, according to the nonpartisan Congressional Budget Office, the poorest Americans would be worse off under the Senate tax plan, because they would no longer receive tax credits under the Affordable Care Act's individual mandate, which the bill would eliminate.
Even without the elimination of the individual mandate, the CBO’s analysis showed that the poorest Americans would still see their taxes go up by 2027, because the individual tax cuts would be temporary while the corporate ones would be permanent.
The White House and the GOP have said middle-class Americans will benefit from the corporate tax cuts because those companies will in turn create jobs and boost wages with the savings.
But business leaders have indicated they are more likely to reward shareholders instead, according to a Business Insider report.
Posted by Ted McLaughlin at 12:02 AM