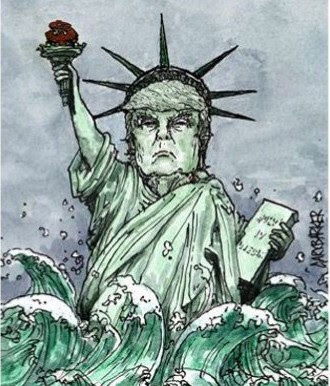 (Cartoon image is by Gary Barker.)

Donald Trump wants Americans to think his presidency has been good for business in this country. That certainly is not true for the tourism business.

The following is part of an article is by Ben Popken at NBC News:


Travel to the U.S. has been on the decline ever since President Donald Trump took office, and new data from the Commerce Department shows the slump translates to a cost of $4.6 billion in lost spending and 40,000 jobs, according to an analysis by the U.S. Travel Association.
The latest data shows a 3.3 percent drop in travel spending and a 4 percent decline in inbound travel.
The downturn has also caused America to lose its spot as the world's second-most popular destination for foreign travel, ceding to Spain. (France is in first place).
International tourism to the U.S. began to wane after Trump took office, leading to a so-called "Trump slump."
Experts say that Trump's proposed travel bans, anti-immigration language, and heightened security measures have had a negative impact on the U.S.'s attraction for foreign visitors.
“It’s not a reach to say the rhetoric and policies of this administration are affecting sentiment around the world, creating antipathy toward the U.S. and affecting travel behavior,” Adam Sacks, the president of Tourism Economics, told The New York Times.
Posted by Ted McLaughlin at 12:02 AM