Donald Trump Has Ignored The Wishes Of The Public 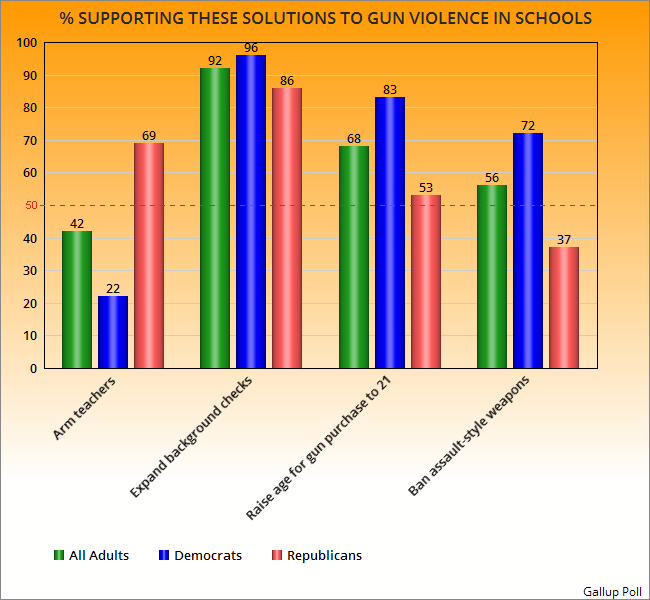 Since the horrible tragedy in a Parkland High School in Florida, the debate on gun violence (and how to keep it out of our schools) is raging again. The chart above is from a new Gallup Poll -- done between March 5th and 11th of a random national sample of 1,515 adults, with a 3 point margin of error.

The chart shows what a majority of Americans would like to see done (and think would be effective) to lower the incidence of gun violence. They want the holes in the background check law closed (92%), the age for buying guns raised to 21 (68%), and to have assault-style weapons banned (56%). The suggestion to arm teachers and other school employees did not get majority support. Only 42% supported that.

I would also like to point out that even a majority of Republicans supported closing the holes in the background check law (86%) and raising the age to 21 for buying a gun (53%). There can be no excuse for not doing these two things since Republicans, Democrats, and the general public all agree it should be done.

Unfortunately, they won't be done. They won't be done because Donald Trump and his Republican cohorts in Congress don't want it done. They receive their marching orders from the NRA (in the form of campaign support and donations), and they have made the decision that keeping the NRA happy is more important than saving the lives of thousands of American citizens.

When Trump unveiled his plan, he included only one of the things above -- the only one that did not have the support of a majority of Americans. He wants to arm teachers. That also happens to be the only one the NRA supports.

It is shameful for our elected representatives to ignore the wishes of the American public while bending to the will of the NRA -- but that is the situation we find ourselves in. That must be changed, and the only way to do that is to vote the Republicans out of power.
Posted by Ted McLaughlin at 12:04 AM