Most Americans Think Teachers Are Underpaid 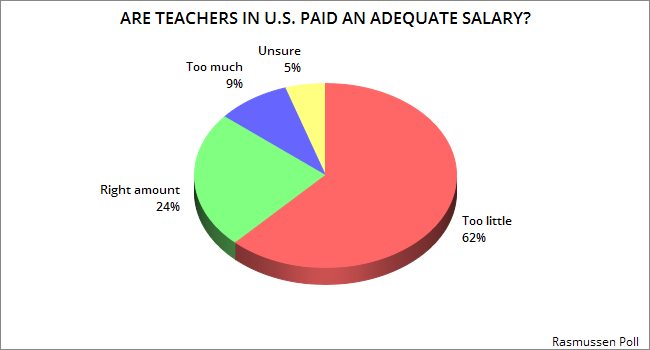 Teachers in some states have gone on strike for better pay, and legislators (especially in red states) are claiming they cannot afford to raise teacher salaries. What does the general public think?

The Rasmussen Poll decided to find out. They asked 1,000 likely voters on April 4th and 5th whether teachers were paid too much, too little, or the right amount. The margin of error for the poll was 3 points.

It looks like those red state legislators need to stop worrying about cutting taxes for the rich and find the money to adequately pay teachers. About 62% of the public says teachers are paid too little, while only 24% say they are paid they right amount and 9% thinks they're paid too much.

When it's time to run for re-election, these legislators will swear in unison how much they value education. It's time they put the money where their mouth is. Underpaying teachers is not valuing education.
Posted by Ted McLaughlin at 12:06 AM