Most Religious People Say NO To LGBT Discrimination 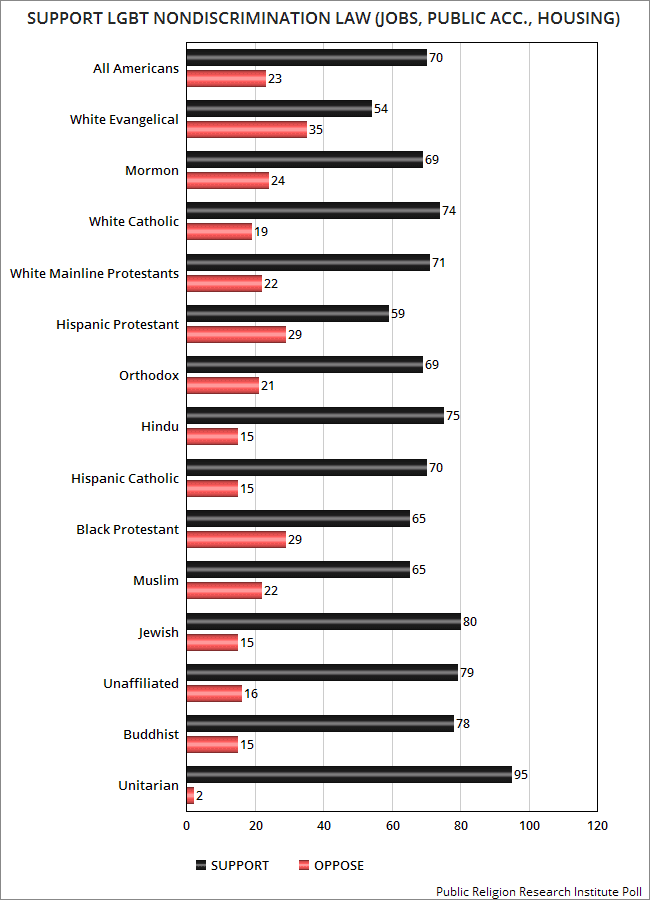 There are still some religious people who think businesses should be allowed to refuse service to LGBT individuals on religious grounds. The say it violates their "right" to religious freedom. They are wrong. The right to worship freely does not include the right to use religion to discriminate.

Fortunately, Americans are not buying into this specious argument. About 60% of Americans say businesses should not be allowed to discriminate by hiding behind religion, while only 33% say they should. Only two religious groups disagree -- white evangelicals and mormons. All other religious groups (christian, nonchristian, and those with no religion) have majorities saying businesses should not have the right to refuse service (see top chart).

And no group would oppose a law preventing discrimination against LGBT individuals concerning jobs, public accommodations, or housing. Even white evangelicals and mormons are on board with such a law.

More remains to be done to insure the LGBT community has the same rights as all other Americans. But religion is disappearing as an excuse to deny those rights. That's a good thing.

These charts are from a new Public Religion Research Institute Poll. It was done between April 5th and December 23rd of 2017. About 40,017 people were questioned, and the survey has a margin of error of 1.2 points.
Posted by Ted McLaughlin at 12:08 AM